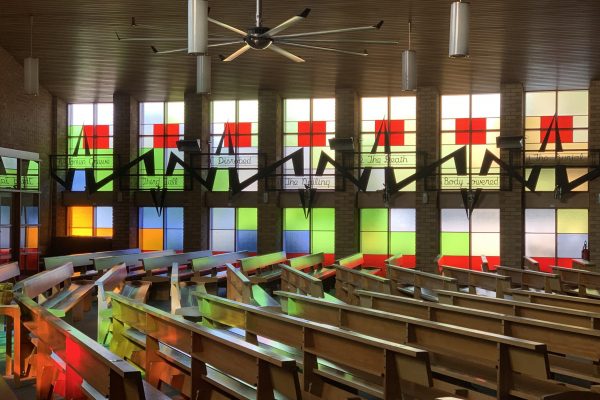 In 1952, the property at the corner of Bentley and Erasmus Streets was purchased by Fr Timothy Fitzpatrick, Parish Priest of Our Holy Redeemer Parish, Surrey Hills. This property consisted of a large two storey house, a coach house and stable, and an acre and a half of land.

In 1954, the coach house and stable were converted into the Church of Our Lady of Perpetual Succour.  The area was declared a parish in 1955 and Fr John Kelly was appointed Parish Priest. The first parish Mass was celebrated in January of that year.  Read more…

The feast day of Our Lady of Perpetual Succour is celebrated on 27 June.

The traditional icon, Our Lady of Perpetual Succour, believed to have been painted in the thirteenth century, represents Mary the Mother of God comforting the Child Jesus while the Archangels Michael and Gabriel, hovering in the upper corners, hold the instruments of the Passion. St Michael (in the left corner) holds the spear, the wine-soaked sponge, and the crown of thorns. St Gabriel (in the right corner) holds the cross and the nails.

The intent of the artist was to portray the Child Jesus contemplating the vision of his future Passion. Despite a foreboding vision of suffering, the icon also conveys the triumph of Christ over sin and death, symbolised by the golden background as a sign of the glory of the resurrection. The royal crowns on the heads of Jesus and Mary also symbolise their triumph as the King of Kings with his Queen Mother.

The icon was brought to Rome toward the end of the fifteenth century by a pious merchant, who whilst dying there, ordered by his will that the picture should be exposed in a church for public veneration. Crowds flocked to the church, and for nearly 300 years, many graces were obtained through the intercession of the Blessed Virgin.

In 1812, the church was destroyed and the picture disappeared. It was over forty years before it was rediscovered. In 1865, Pope Pius IX, who had prayed before the picture as a boy, ordered that Our Lady of Perpetual Succour should again be publicly venerated. He later fixed the feast day on the Second Sunday before the Feast of the Nativity of John the Baptist.

Today, the icon of Our Lady of Perpetual Succour hangs above the main altar in the Church of St. Alphonsus Liguori in Rome, Italy. Our Lady’s Primary School was established in 1957 when parents and parish combined skills to construct the original building.  The school continues to operate as an integral part of the Surrey Hills Wattle Park Parish.  The community spirit remains strong as does commitment to care, achievement and excellence – traditions maintained for forty years at Our Lady’s.

Our Lady’s is a small, friendly school with co-ed classes from Prep to Year 6.  The school values the development of self-confidence, independent thinking, and care and sensitivity to others.  The school’s website provides further information about this welcoming community.

Parish Priests at Our Lady of Perpetual Succour