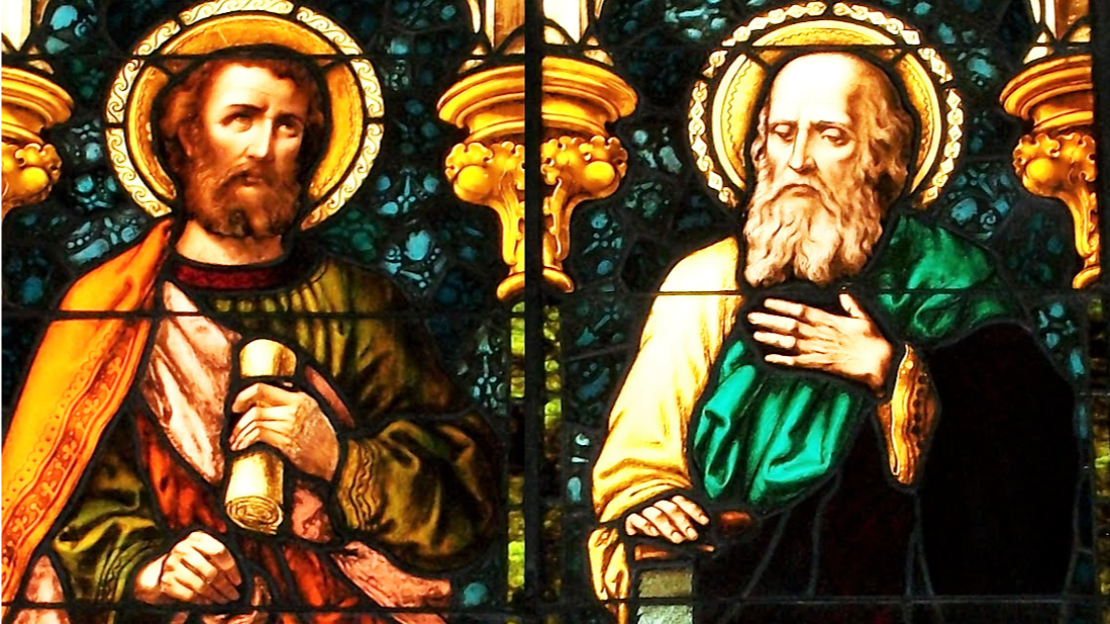 Saints generally have their own feast days in our liturgical calendar.  Some of the saints, however, have a shared feast-day due to their unique relationship.  One example is the feast-day of Sts Simon and Jude whose feast we commemorate on 28 October.

St Simon, not Simon Peter, is one of the 12 Apostles whose name is mentioned in Matthew 10:2-4 as Simon the Zealot.  This means that he was a member of the Jewish sect called Zealot who had great zeal for honouring God and maintaining purity of religion.  After meeting Christ, his life was changed and he became one of the followers of Christ.  St Simon is represented in art and iconography with a saw, the instrument of his martyrdom, and he is the patron saint of couriers, tanners and sawyers.

St Jude, not the Iscariot, is known as Thaddaeus in the list of 12 Apostles (cf. Matt 10:2-4).  He is a brother of the apostle St James the Lesser as well as a relative of Jesus.  The image of St Jude often includes a flame around his head, which represents his presence at Pentecost, and carrying an image of Christ at his chest or in his hand. St Jude is the patron saint of desperate or hopeless causes.

One of the traditional reasons given for St Jude being the patron saint of desperate causes is rather simple but fascinating. Jude Thaddaeus, it was believed, could be mistaken for Judas Iscariot who betrayed our Lord.  People, therefore, were afraid to seek his intercession for fear that they would be asking the wrong person!  As a result, only desperate people would ask for his assistance. Being so seldom invoked and reverenced Jude was always ready to intercede for the prayers addressed to God. Paradoxically, has resulted in St Jude as the Apostle being invoked in prayer more than any other saint!

In actual fact, we know little about Sts  Simon and Jude beyond what the gospels tell us of them as apostles. We also know that they failed to be faithful to Jesus in his time of trial: they ran away from him as he was on his way to Calvary. They, however, returned to the upper room where they had encountered him washing their feet in service and where they had eaten the Last Supper with him, prefiguring the Eucharist.  After receiving the Holy Spirit while praying in the upper room, their fear has transformed into boldness even to the point of martyrdom. They who were afraid to witness the name of Christ at Calvary preached his name in Mesopotamia and Persia, and they who ran away from the suffering Christ died for the resurrected Christ. They have made known the name of Christ through their lives and actions and this is also what the other saints of God have done. This is also what we are called to do and we carry within us the same potential to be saintly as they were. So, we are called to be saints.

Sts Simon and Jude….. pray for us.

As I read this story, I was actually emotionally overcome - like something had ‘washed’ over over me. This happens to me on the odd occasion to do with religion matters -it feels like an overwhelming frisson or a heating up of my being .
This happened when I read about about St Jude and Simon running but then returning to the resurrected Christ. Receiving the HolySpirit and going on to preaching The Word. In particular, I feel connected to St Jude all my life and something moved in me upon read this short story. I don’t know what to call this experience- it’s happened before regarding religious matters. Does anyone else experience similar? I’d be interested to share stories.