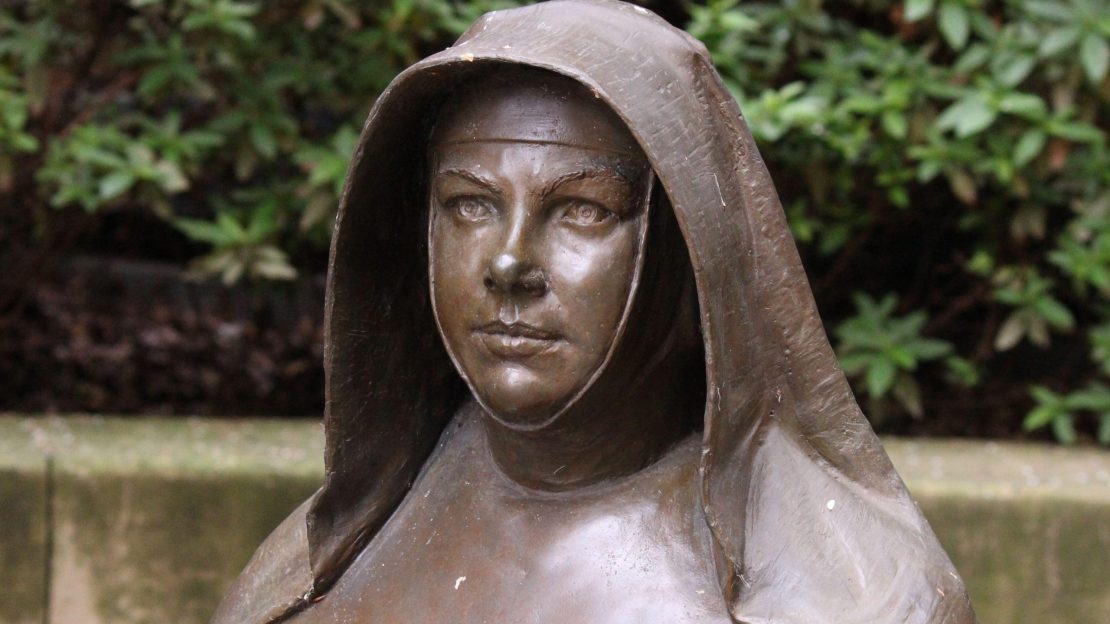 I was lucky enough to be in Rome in 2010 when Mary Mackillop was canonised.  It was October, and St Peter’s Square was full of Australian accents and excited pilgrims who had made their way to the celebration of Australia’s first Saint.  There were six new saints added to the Church on that day.

The embrace of the colonnades surrounding the Basilica, formed a community of the faithful who arrived patiently from early morning, to take their place on the historic occasion.  Part of the ceremony included telling the story of each of those who were to be canonised.  The well-known story of the working-class girl from Fitzroy was told.  She had a passion for education and a heart for the poor.  She looked after her own siblings in Melbourne before moving to Penola and founding the first Australian religious order.  Her story was heralded from the Piazza of St Peter’s Basilica, with her image adorning the façade.  Each of the new saints was added to the litany.  We all prayed, that through their intercession the Lord would visit his people and more would witness to the presence of God and the coming of the kingdom of justice and peace.  The communion of saints is never more real than at a ceremony of canonisation.

The next day the hundreds of Australians who were in Rome made their way to the Basilica of St Paul’s Outside the Walls to celebrate a Mass of Thanksgiving in honour of the new saint.  St Paul’s also has deep connections with Australia.  It was at this Basilica that Father Salvado, a Benedictine monk and the founder of the New Norcia Monastery in Western Australia, had brought two Aboriginal boys in 1849.  This was to be the beginning of a dream that Indigenous Australians would take up the missionary task of bringing Christ to the great south land of the Holy Spirit.  Both of the young men, who had been enthusiastic for the journey, fell ill and eventually died.  One of them is buried at St Paul’s.  A fuller version of their story was told by religious affairs journalist Barney Zwarts, at the time of Mary Mackillop’s canonisation.

The Mass of Thanksgiving, on the day after the canonisation of Mary of the Cross, was celebrated with the inclusion of Aboriginal and Torres Strait Islander Australian Catholics.  Members of the Aboriginal Community ceremoniously danced the gifts of bread and wine to the altar.  The late Aboriginal Deacon Boniface Perdjert, from the Northern Territory, assisted at the Mass.  And after the Mass, a group of Aboriginal Catholics prayed and sang over the burial place of the young Francis Xavier Conaci, the young Aboriginal man who had accompanied Father Salvado to Rome.  I can remember standing with Vicki Clark from the Aboriginal Catholic Ministry and learning of this incredible history.

Mary Mackillop united Australia on those days in Rome.  She brought together Catholics with all people of good will.  She allowed us to experience the participation and inclusion of Aboriginal and Torres Strait Islander voices in our church and liturgy and she opened our eyes to a part of our history many did not know.

This Sunday we celebrate the Solemnity of St Mary of the Cross.  I am grateful that I was able to witness those days in Rome during her canonisation.  I hope that our whole church can be inspired by her practical spirituality, ‘never see a need without doing something about it’.  And I hope that through her intercession the hope expressed  by St John Paul II in Alice Springs in 1986 can come about: “You are part of Australia and Australia is part of you.  And the Church herself in Australia will not be fully the Church that Jesus wants her to be until you have made your contribution to her life and until that contribution has been joyfully received by others.”

Saint Mary of the Cross

“We must often feel weary and tired, yet
God brings us through all these things”
Mary Mackillop, 1874