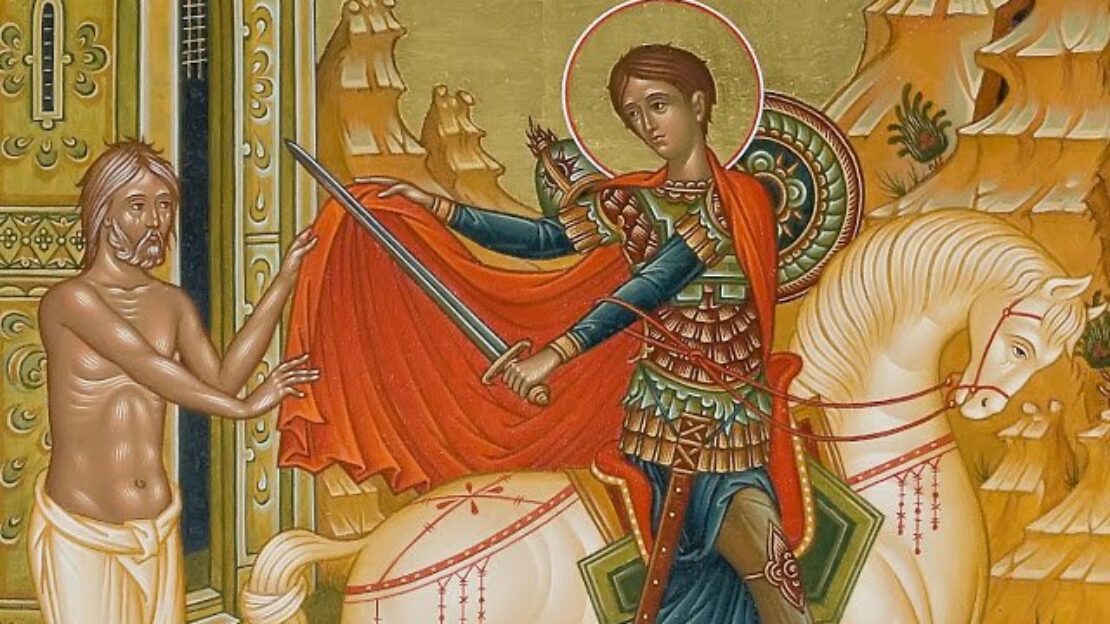 Some people may remember the story of St Martin, a Roman soldier, cutting his cloak in two to give half to a beggar he met who was suffering from the cold.  His life of course went well beyond this incident.

Martin was a Roman soldier, as was his pagan father before him.  Martin became a catechumen early but was not baptised until later in his life.  As he went on living his life as a soldier he felt that there was a contradiction between being a Christian and being a Roman soldier and so he decided to leave his military career.  The authorities did not take kindly to this and he was imprisoned, as what we would call today a conscientious objector.  He was released from prison in 357.

He went to Poitiers to join St Hilary, and founded the first monastery in Gaul (more or less France) at Liguge on land given by St Hilary.

In 372 he became bishop of Tours by acclamation.  Acclamation was the early way in which bishops were appointed; they were acclaimed by the people and clergy and were then ordained bishops by several other bishops from the surrounding area.

He went on to found many other monasteries.  This was a significant pastoral initiative as monasteries at that time were not so much places of seclusion as centres of evangelisation.  It was from monasteries which were established in rural areas that the Christianisation of the surrounding rural countryside took place.  The countryside lagged behind the cities in the spread of Christianity in that century.

It is also significant that it was during his lifetime that the Emperor Constantine gave the Church freedom and favoured its spread, so he was a witness to the gradual conversion of the Roman Empire to Christianity.

Martin was one of the most popular saints of the Middle Ages.  In so many of the ancient churches of Europe there is still a shrine to him and it is estimated that about 500 villages and 4,000 churches were named after him.

St Martin of Tours’ feast is celebrated on 11 November.