The kingdom of God is like a seed planted that can grow into the biggest of seeds. This kind of imagery is also found in the First Testament and today we see it in the prophet Ezekiel who talks about taking a shoot from a branch.

Today, perhaps, we could reflect on the seeds that were planted in the Scriptures for us to build on.

The First Testament has at its heart a number of events that shaped Israel into God’s people. The first is the event of the Exodus. It is at the heart of the First Testament. If you want to read the Bible you don’t start with the first book and read your way through. The way to understand the First Testament is to understand the events which shaped all the writings and reflections contained in it. There are two major ones. A) The Exodus and B) The destruction of the Temple and the Babylonian Exile of 587 BC. The books of the Bible are written backwards and forwards around these events. What are these events about?

The Exodus is summed up in the first commandment – I am the Lord your God who brought you out of the land of Egypt, out of the house of slavery, you shall have no other God but me. The God who rescued God’s people from slavery and oppression by a foreign power, in a country that had become their home in exile, is the only God. God is the God of liberation and freedom who does not stand for oppression, violence, or exploitation. This understanding of God, and this event of the Exodus, permeates the writings of almost every book of the First Testament.

The second event is the destruction of the Temple and the Babylonian exile. In the sixth century BC when the superpowers of the day, Assyria and Babylon (Chaldea) were honing in on Israel – and the north fell first to Assyria and the south later to Babylon – Israel felt that God had abandoned her. Carried off into exile. No king, no temple, no ritual and cultural life. Israel had to start again.

How did they renew themselves; what was their reflection? The covenant that God made with Israel always asked them to be looking out for the widow, the orphan and the stranger. Being God’s people is about living in exile, and looking out for each other, knowing that all of us are on a journey that calls us beyond, to the ‘more’ that life holds and offers and always has a future orientation. (Christianity will claim not only future but eternal orientation).

What we call ourselves today, a parish, has its origins in this notion of living among strangers and in exile. The word parochia has its origins in this experience. We have been used to seeing parish as a territory bounded by – Union Road, Harp Road, Canterbury Road, Elgar Road… a place. But a parish also has a theological meaning. The root word means either 1) living beside neighbours particularly alongside the stranger, or 2) living in exile with our home elsewhere.

Israel is called to show compassion to the stranger and the foreign traveler. Israel knows what it is like to be away from home and without a land of its own. The parochia becomes a people. They are a community for whom God will be a leader.

There is something at the heart of the Judeo-Christian tradition that is about recognition of the displaced and the travelers. There is something about the root theological meaning of the parish as the witnesses to God’s accompanying presence for those who are displaced.

That is why Pope Francis says ‘we ourselves need to see and enable others to see that migrants and refugees do not only represent a problem to be solved, but are brothers and sisters to be welcomed, respected and loved. They are an occasion that Providence gives us to help build a more just society, a more perfect democracy, a more united country, a more fraternal world and a more open and evangelical Christian community.’

At the moment in our world this message seems to be like a seed… Refugees are often seen as a problem and too often one in which they are used as pawns in political and economic games in which it seems that the end can justify the means.
The seeds of a different response are certainly within our tradition.

Last weekend, we heard and experienced the story of Jesus calming the storm and reassuring his closest disciples with his presence.  This weekend, we come… 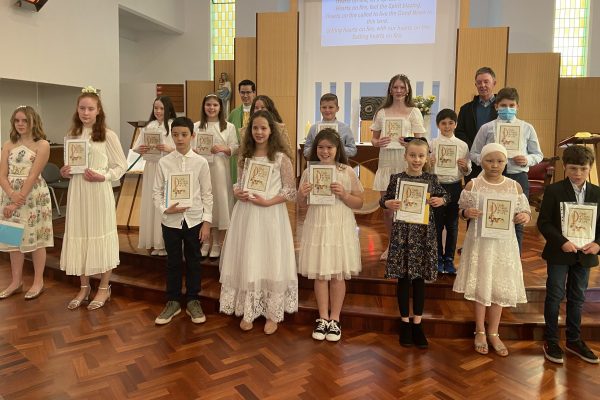 “I am the bread of life; whoever comes to me shall not hunger, and whoever believes in me shall never thirst.”  (John 6,…