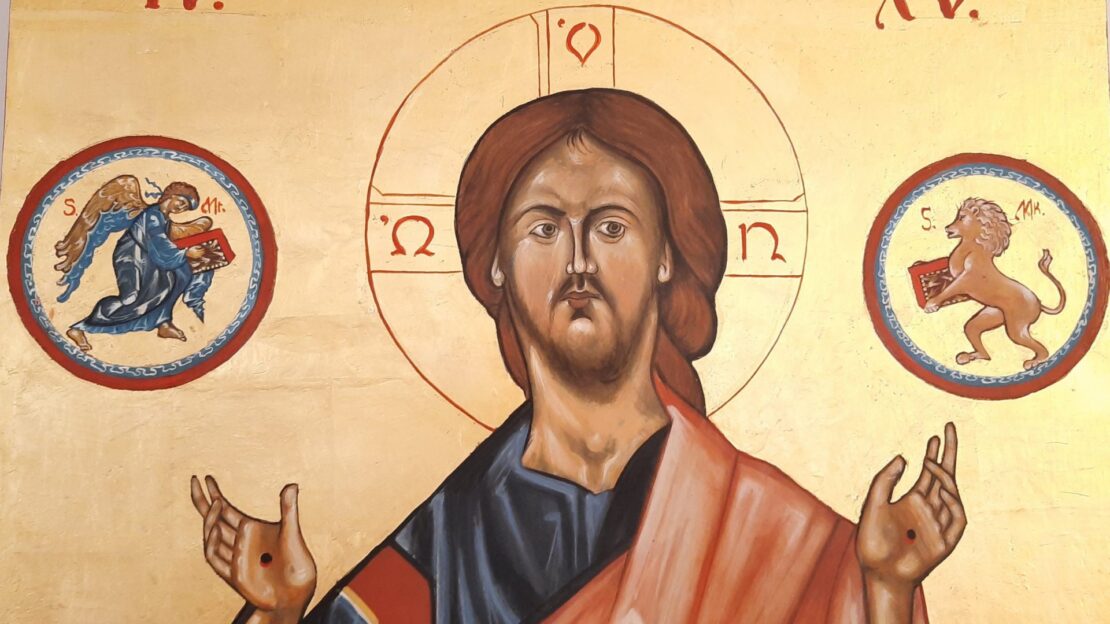 Icon of the Holy Redeemer – history and traditions

This weekend’s Feast Day is an opportunity for Geoffrey Horgan, the iconographer who painted (wrote) the ‘Icon of the Holy Redeemer’, to share his story and some of the tradition of icons as religious imagery.

I was commissioned to paint the icon of the Holy Redeemer in 2019 by Father Mark Reynolds.  Peter Collery directed him to me as Peter was familiar with the two icons I had painted on either side of the main entrance of St Patrick’s Cathedral, of Christ and the Blessed Virgin.  With grandchildren attending Our Holy Redeemer Primary School, I had been to Our Holy Redeemer Church a few times previously.  I suspect Peter persuaded Father Mark a large image of the church’s name sake was needed on the blank right wall.  That said, Father Mark was very specific about exactly what was wanted, a full length image of Christ the Redeemer with arms outstretched embracing the viewer.

The image is painted on gesso (plaster) on a wooden base.  The technique used is called egg tempera, that is, the paint applied being a mixture of dry colour pigment, egg yolk and water.  The egg tempera technique is very old and dates from the first centuries AD.  It was the standard European painting technique well into the Renaissance.  For example, Botticelli’s Birth of Venus is painted in the egg tempera technique.  Oil paint gradually replaced egg tempera from the 1500’s.  The background is pure gold leaf applied using an oil size.  The Standing Christ figure is typical of representations of the Lord except usually, He is shown blessing with the right hand and holding the Gospel, either open or closed, in His left hand.  Father Mark was very definite about depicting the Lord as Redeemer embracing us all.

There are four symbols of the Evangelists around the central figure of Christ; the angel is St Matthew, the lion St Mark, the eagle St John and the ox St Luke.  The icon reflects it was through the Evangelists the Redemption was made known to us.  The images come from the biblical books of Ezekiel and Revelations.

It might be thought icons lack originality, that they slavishly follow precedent and lack originality.  To some extent this is true, but it should be borne in mind the expression of individuality is quite foreign to the concept of an icon.  It reflects on a timeless, revealed truth rather than to challenge or astound the beholder as a modern painting might.  If the icon is of Christ, the Blessed Virgin or a saint, it directs our minds to venerate the source of the image; if it is of an event, such as the Resurrection or Nativity, its purpose is to focus attention on that event’s significance.

My interest in iconography was sparked whilst at university, studying law, when my wife and I were introduced to the Byzantine Rite of the Catholic Church.  We attended Mass regularly in the Rite at the Melbourne Russian Catholic Centre in a Chapel covered in icons, some of them of outstanding quality.  Despite studying law, I was an amateur painter with an interest in medieval art.  The Rite quickly became our spiritual home and I started painting icons.  In those days there were no local iconography schools so l learnt the technique by trial and error with the encouragement of the Centre’s clergy.

Perhaps it was ignorance on my part but it seemed modern Latin or Western Church religious imagery was either too abstract or very wishy washy.  The beautiful, rich tradition belonging to the pre-Renaissance and Renaissance Western Church, which had had its origins in the Byzantine world, had greatly weakened or been abandoned.  The iconographic style, on the other hand, retained a dignified formality that avoided sentimentality, subjectivity and, indeed, overweening individualism.

The upshot was I started getting commissions from the Russian and Greek Orthodox Churches with whom the Russian Catholic Centre had good relations.  This was significant in so far as the Orthodox tradition expects iconographers to be deeply prayerful, and preferably in Holy Orders.  The tradition calls for prayer and fasting before and during the “writing” of an icon.  An icon is said to be written, not painted, because in many respects it is almost a form of calligraphy.  Icons will follow a strict format: Christ will, since the 6th century, be represented as a mature man with a beard and long hair with a reddish hue; St Peter a rather muscular middle aged man carrying a set of keys; St Paul a balding man with a long dark beard and ascetic appearance, and the Blessed Virgin in a brown or navy blue robe with a dark wimple.  Christ in her arms is never shown as a chubby baby but rather a small young man.

I remained largely self-taught until I won a Craft Scholarship in 2013 to study overseas with a Russian icon master near London and then an English icon painter in Bethlehem.

Should you be interested, examples of my Melbourne work can be found in St Patrick’s Cathedral, St. Francis’ Lady Chapel in the city, the hanging crosses in St. Augustine’s, Bourke St., and the reredos (ornamental screen at the back of an Altar) at All Saints, Fitzroy, and St. Joseph’s, West Brunswick. Those travelling to Tasmania might be interested in the reredos at Sacred Heart Chapel in Hobart Cathedral.

I occasionally attend 8am Friday Mass at All Saints Fitzroy, and I always spend time admiring the beautiful icons behind the altar. Thanks Geoff for sharing your story and explaining the process of writing icons, and for your beautiful work. My parents were married in Our Holy Redeemer, when it would have looked very different to today. (I am very happy to see the altar back where it should be.)

I agree! I found this article really interesting and will look forward to visiting the OHR Church and St Patrick's to view this art. Thanks for sharing your knowledge and skill Geoffrey.

Thanks for this interesting story of Geoffrey Horgan's interpretation of Christ the Holy Redeemer Icon. I was not aware of the "rules" regarding the 'writing' of an icon. 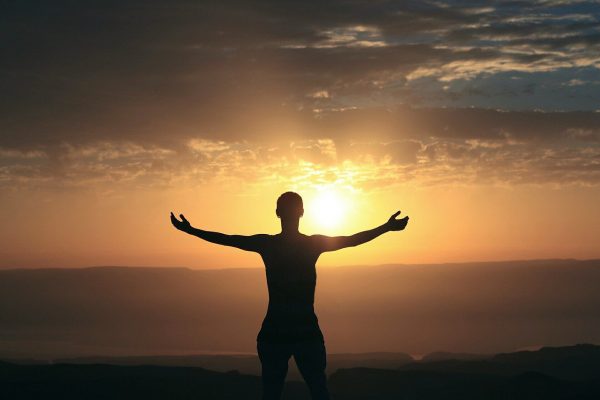