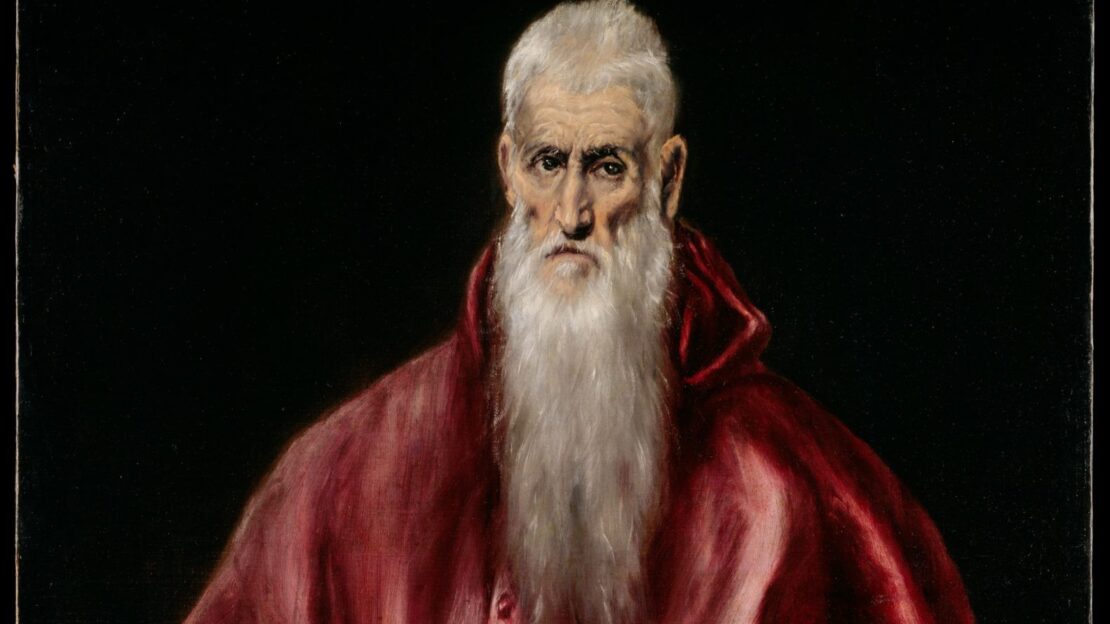 Jerome was born in the fourth century (c.341) and died in the fifth century (c.420).  He is most famous as a biblical scholar who translated the Bible into Latin from the original Hebrew and Greek.  There were other Latin translations which preceded his, which were rather unsatisfactory.  His translation, called the Vulgate, became the accepted translation throughout the Latin-speaking Church.

He was born in Dalmatia (now part of Croatia), was educated in Rome, travelled widely, and having come back to Rome acted as secretary to Pope Damasus for a few years in the later decades of the fourth century.

Jerome seemed to have a propensity for getting into conflicts and appears to have been a rather difficult character.  There are those who would say that he would have had no chance of becoming a saint according to today’s stricter criteria.

He ended his days in Palestine and died in Bethlehem.  He was given the title ‘Doctor of the Church’ because of his translation of the Bible from the original languages into Latin, which was in itself a remarkable achievement, and for his scholarly commentaries on the scriptures.

Jerome is perhaps a good example of the fact that saints are not offered to us as perfect people but as holy people.  It is the seriousness of their relationship with God which makes them saints rather than some flawless moral perfection which is impossible for any human being.  Jerome’s impatience, testiness and cantankerous nature were real, but so was his relationship with God and his desire to enable a greater number of people to have access to the scriptures.  Even in a time when the vast majority of people could not read, they needed to hear the scriptures in a language familiar to them.  This was an immense service to the whole Church.

The feast of St Therese is on 1 October.  She died at the age of 24 and she lived in a small Carmelite community in Normandy, France.  She was declared ‘Doctor of the Church’ in 1997 by Pope John Paul II.

Therese lived an entirely simple and quiet monastic life.  She never left the gates of her convent after entering it at the age of fifteen.  She wrote a spiritual journal called ‘The History of a Soul’ which became a spiritual classic and proved to be great spiritual nourishment for a considerable number of people.  Its remarkable content would be the major reason for her becoming a Doctor of the Church.

What was so important about Therese’s spirituality was that it was accessible and practicable for ordinary people despite the fact that her life was entirely monastic.  Her spirituality centres on ordinary everyday life and the difficulties of living with people who are different and sometimes hard to get on with.  She lived simple things like doing the washing in a faith-filled and others-centred manner.  Her life was filled with ordinary things, events and activities much like our own.  She struggled with illness which of course eventually brought about her death.  She also struggled with prayer as her journal makes clear.

She became very popular in the decades after her death because her “little way” was so imitable for Catholics in their everyday lives.  Her way was imitable at the domestic and familial level despite the fact that she herself was a contemplative nun.

Perhaps the most important thing she offers us is a profound trust in God.  She lived in an age which was too strongly influenced by an over-concentration of human sinfulness and a legalist conception of God to the neglect of the all-pervading love of God.  It was in Therese’s capacity to entirely entrust herself to God that counteracted that attitude for many people.  She showed us something more of the true face of God.