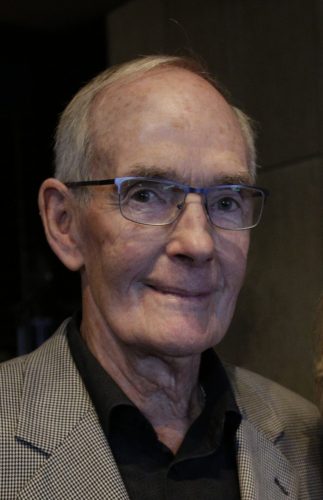 Adrian Christopher Joseph Harris was born 22 December 1937.  He died peacefully in the calm of the early morning on 20 April 2020.  He left as he lived, without fuss, when he was ready, and with great faith, strength and calm. He left loved and having given love.  He is survived by his beautiful Susan Mary, six children and their partners and 19 favourite grandchildren.

Dad was the eldest son of Leonard (OBE) and Katherine Harris whose family grew to include Dad’s siblings Christine, Clare, Paul, Brother Michael and Martin. He was one of the first ten babies born at St Vincent’s Hospital, Melbourne, and was welcomed by Archbishop Mannix. In 2012 on the 75th Anniversary of the Hospital he returned to be photographed alongside Evie his 17th grandchild who was representing the baby most recently born.

He was educated at St Cecilia’s Primary School, Glen Iris and St Patrick’s College, East Melbourne.  He lived his early years in Glen Iris, then moving to Wellesley St, Mont Albert. His upbringing and involvement in the local parish and school provided formative growth to Dad’s strong faith, his strong road map for life.

He completed a Diploma in Electrical and Mechanical Engineering at Swinburne University of Technology, which paved his way into a scholarship position with GMH at the General Motors Institute, Flint Michigan, USA.  Prior to his departure, he proposed to Mum who said ‘Yes’ and Dad went ahead to Michigan. Mum joined him later, after completing her teaching course at Toorak Teachers College.  They married on 14 March 1964, and they honeymooned at Niagara Falls and so began their 56 years of married life together.

Dad became a father for the first time in Michigan when Patricia was born. He completed his scholarship and student days and returned to Melbourne in August 1965. He settled his family in the ‘burbs’ of Doncaster and continued his work at General Motors (GM), Fisherman’s Bend.  He drove a work car with test parts, which would arrive home with fabric draped over the dashboard covering instrument panels.  This ensured the elements being tested or developed could not be seen by outsiders.  In 1982, as global systems expanded, Dad was relocated to Isuzu in Fujisawa, Japan to work in partnership with General Motors.  The whole family moved to Yokohama despite his concern that the risk of sending six children, including four adolescents, was too great.  GM sent Dad anyway.  The family experienced complete culture shock and then eventually settled into life in Japan.

During his time in Japan the family had home leave and Dad decided we would return to Australia via the USA one year and Europe the next.  Our back-packing trip to the USA with our family of eight was iconic. We all had our one bag and one other to be responsible for as we travelled through airports, cars, and houses.

We returned from Japan in 1986 and Dad continued with GM until his retirement in 1999.  In retirement he continued to work doing contracts in USA, England and Thailand, which gave Mum and Dad the chance to meet up with friends from earlier overseas stays and family including Gab and Clarey who were also now living overseas.

When Dad finished his working life, he launched into his very fulfilling retired life, with golf, Vinnies, Blairgowrie, and travel with road trips around Europe and Australia.

Dad first met his beloved Susie at Sorrento, and his steady attitude and inability to be easily impressed appealed to Mum.  They shared a great sense of humour and were high achievers at seeing the silver lining.  He was very dry and he was able to throw in a levelling dry comment with an appropriate facial expression to calm many situations.

After Trish was born in Michigan, Amanda, Michael, Anne, Clare and Gab followed.  We were all born within 10 years and were very close.  Trish cried when I cried, Mic came home from hospital in a fruit box and Annie had the bassinet, then came Clare and Gab.  Dad provided for us all, a stable and safe home. Saturday was for sport, lawns and garden and Sunday was for Mass, family, picnics and adventures; all complimented by a large extended family on each side.  Mum and Dad were both one of six children.

They were active at St Greg’s parish in Doncaster where we attended primary school, and when they moved to Balwyn in 1990 they joined OLGC parish.  They made life-long friendships.  They both had a strong faith and they worked together and drew strength and love from one another.  They were still meeting with their special Team up until Dad’s death.

Dad was like that in our lives.  He felt solid and safe and was ready for you to try what you wanted to try. He would not say you can’t, shouldn’t or don’t. He was a kind and gentle man; who was strong in himself, predictable and reliable.  He would tell us he had a smack in his pocket, but it never came out.

We were five girls and one boy and we were all valued as individuals.  Dad taught us, especially his daughters, we could achieve, be independent, make our own decisions, face challenges and to never give up or take the easy way out.

He was hospitable to visitors and extras being around and he was generous; the house in Blairgowrie was for the family and friends to come, stay and enjoy together.  He loved a swim and was able to walk on the beach until his last stay just two weeks ago

After the massacre in Christchurch, he and Mum attended the local mosque to show feelings of support for what happened.  Once inside, they realised they were at North Balwyn Greek Orthodox Church.  It was a beautiful if mistaken, gesture but he could always see the light side and have a chuckle about the situation.

Just over week ago I spoke to Dad on the phone. He had a long painful coughing fit and I listened and waited until it was over.  When I expressed my concern, I asked him if he ever felt like complaining. He said ‘no I don’t’ and I told him I was happy that he had said that as his answer reflected his true character.

So, Dad, as we say goodbye;

Your beliefs and your love for Mum will be your legacy.

Peace for you at last, all our love always