Life is Changed not ended 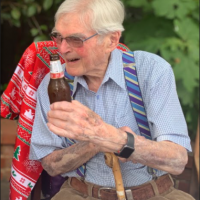 A farmer, a jackaroo and a stock agent walk into a bar.  A few hours later they leave having hatched a plan to go exploring West Australia.  So enthusiastic are they, that the publican’s son, overhearing them, decides to join them.

The year is 1950.
The bar is in the Moyhu Hotel in North East Vic.
The jackaroo is Michael Lethbridge.

Like many a scheme hatched in a bar, it had, as Michael would say, a few fishhooks; not the least of which, was the discovery that the ship sailing west was fully booked.  So, the intrepid explorers simply decided to take the next departing ship – which was a tramp steamer called Bulolo sailing to Papua New Guinea.

It was, as they say, the beginning of a great adventure.

Michael Harry McRae Lethbridge was born on 20 June 1928 in Palmerston North, New Zealand, 10 years after World War 1 when horses were more common than machines and electricity was a city luxury.

His father, Dan Lethbridge ran the family farm called Ruatangata in the beautiful Turakina Valley in New Zealand.  Michael’s mother, Joan McRae hailed from a farm called Blairichburn not far away at Palmerston North.  Dan and Joan married in 1924 when Joan was only 20 years old and Dan 23 years old.  They had two children, Michael, in 1928 and six years later, his brother Tim.

As was the custom in the 1930s, Michael was shipped off to boarding school, even though it was only 20 miles away in Wanganui.  His world, like everyone else’s, was turned upside down with the outbreak of the Second World War in 1939.

Because Michael’s father was an experienced pilot, he was taken off the farm to serve with the New Zealand Air Force, mainly in training and intelligence.  Dan and his wife Joan were posted all around New Zealand and overseas meaning that over those war years Michael saw very little of his parents.

After the end of the war and school finished, Michael returned to life on the farm just as his father, grandfather and great grandfather had done.  But Michael was restless and unsettled.

His father Dan was damaged by the war – the attrition rate in the air force was horrifying – and I suspect he was not an easy task master.  So Michael set off.

At 19, he found himself working at a friend’s farm at Ruakituri, a steep, hilly area near Gisborne in the east of New Zealand.  Each shepherd, as they were called, had to have a horse.  Michael loved horses and believed he could spot a good one.  Unfortunately, the horse he chose had the singular problem of being unrideable.  A local horse-breaker, who exceptionally only had one arm, was brought in.  In the breaker’s hands, the horse was docile and easy.  But as soon as Michael mounted, the horse bucked and kicked like in a western rodeo.  Michael was not going to let this horse get the better of him.  He should have.  He mounted the horse again only to have it rear and fall – crushing Michael against the rails.  Michael survived but his future as a sheep farmer did not.  Nor did his reputation for being a good judge of horses.

Michael then decided to explore farming options in Australia – hoping to find something kinder to his back.  Fate intervened again when he secured a job at Moyhu Park, a large cattle and cropping farm.  He soon became good friends with the owner’s son, Bill Simpson.

They had big ideas, and so it was, with a great deal of optimism and adventure, the feckless four set off from Moyhu for Western Australia – only to end up in Papua New Guinea.  Their ship, Bulolo, being a tramp steamer, took only 12 passengers in addition to its cargo.  With a rueful smile, and looking into the middle distance, while docked in Sydney, a very attractive brunette (Michael’s words) walked up the gangplank.

She was Jean Chisholm, a 26-year-old graphic artist from Melbourne, embarking on an adventurous holiday with her friend Judith O’Grady.

One thing they had in common was spending their formative years alone in boarding schools.

Now nobody would describe our parents as rash, impulsive or reckless.  Yet, after four short weeks of sailing around the remote islands of PNG, our parents decided to marry.  They took their vows at Our Lady of Victories, Camberwell 69 years ago, perhaps standing on the very spot where Dad was farewelled from.

Their shared childhood experiences and their shared goal of a family bound them deeply and profoundly and permanently.

Looking at the marriage, it’s got to be said, if you were a betting person, the odds weren’t good.

They had six children: Christine, Colin, John and I as twins, Anna and Kathrine.

Not long after being married, and after several failed back treatments, including six months in a plaster cast, he knew he couldn’t farm.  He was broke and desperate, so he took a job selling tractors, figuring that he liked and understood farmers, was good with machinery and loved the land.

It turned out to be a winning combination.

When the British firm David Brown Tractors opened in Australia in 1962, he was quickly snapped up as General Manager.  These were the golden days of British engineering and marketing.  He loved it.  It was challenging, creative and surprisingly social.  He made many lifelong friendships.

In the 1970s, the company was bought by Tenneco, a large US corporation based in Texas.  Gone was the autonomy and creativity and Michael happily retired in 1985.

Jean and Michael’s relationship was often tested and sometimes testy – but somehow, they thrived and mellowed together.  Perhaps the best illustration of this was how cheerfully and tenderly Dad cared for Mum during the awful years of her motor neurone disease.  And of course, as we are experiencing now, with love comes sorrow.  And Dad was no stranger to that.

Dad had the love of the large family he wanted but the sorrow of the untimely deaths:

His reaction was not to withdraw but to go deeper.

He invested and worked on his relationships.  For nearly 20 years he visited each of the Melbourne households at least weekly for dinner and discussions.  These were lively, intergenerational, and surprisingly interesting.

Who knew Dad was almost a greenie or supported refugees or a more progressive tax system?  In fact, he was one of those rare souls who became less conservative and more liberal with age.

He was diligent and careful to keep individual relationships with each of his grandchildren – understanding their views, skills, interests, and sports – which he dutifully attended for years.

He also kept his connection to the land, machines, and the country, particularly through the World Ploughing Association.  This is an international group of enthusiasts who promote the idea that the preservation of our topsoil, through skilful and careful tilling, is critical to our preservation.

In 1997, Dad was thrilled that the World Ploughing Contest in Geelong, which he helped organise, was judged as one of the most successful after literally thousands of people attended.  And of course, there was the David Brown Tractor Club of which he was patron.  We spent many happy days at rallies and agricultural shows poking around the tractors that he’d help design, build and sell that were now antiques.

As farmers know; you reap what you sow.  He was an exemplary father; kind, concerned, interested and wise.  He never interfered and was the first person who told me that success was something you define yourself and on your terms.  Dad was never aggressive or judgemental, he set the bar very high indeed.

So dad, with our love, thanks and gratitude:

May the road rise up to meet you

May the wind always be at your back

May the sun shine warm upon your face, the rains fall soft upon your fields.

And until we meet again, may God hold you in the palm of his hand.

A beautiful tribute to a wonderful man and a much loved parishioner - one of nature's true gentlemen!

Thank you John, for this wonderful eulogy for your dear father. It is amazing how much you learn about a person after they are gone. May he rest in peace with his wife and children and grandchild.

What a really beautiful eulogy for a man I really admired and like so much. He raised a beautiful family.