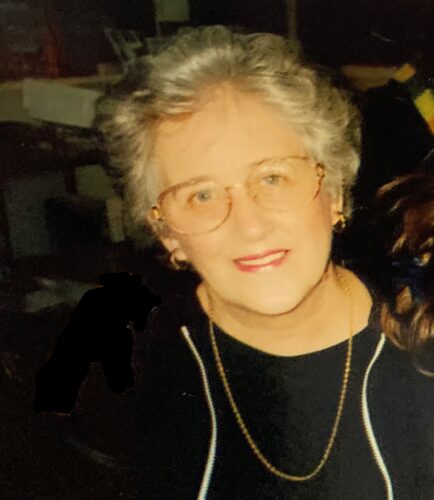 Sylvia was born in Swan Hill to loving parents Frank and Grace on December 14, 1933.  She was a child of the Great Depression and the second daughter after her older sister Audrey.

Sylvia and Audrey grew up on the family farm “Nora Bend”, a wheat, sheep and cattle property at Tooleybuc in NSW.  The sisters travelled together to the local school by bicycle and horse.  I am not sure about the horse, but in Sylvia’s case, the bike was so big compared to the girl, it had to be crashed in order to stop it at the school.

After attending the Swan Hill convent school, Sylvia undertook nursing studies in Melbourne, specialising in mothercraft.  She travelled and worked overseas in New Zealand with one of her closest nursing friends, Helen O’Brien, who was later to join Sylvia on her wedding day as a bridesmaid, along with another nursing friend Margaret Bradley.

Sylvia loved babies and children.  She stayed with Audrey for three months after the birth of her sister’s twin boys Dan and Frank to help with their care.  When she worked in Melbourne, she took neglected and orphaned children on holidays with her to Nora Bend.  Her favourite was a little boy by the name of Robbie and she later lamented not being able to stay in contact with him.

Sylvia and her husband-to-be John met in Albury and he often enjoyed the lunches prepared and delivered by her during the working day.

They were married by Fr David Kehoe in St Augustine’s, Bourke Street, Melbourne in 1961 and holidayed in Lakes Entrance afterwards.

Settling in Mitcham, Sylvia and John had two girls Louise and Christine.  John and Sylvia started their own businesses and moved to Balwyn.

Her parents, as well as her aunt Mary and uncles Jack and Jim eventually moved locally, from the country, to be in Sylvia’s care.

She was devoted of course to her family but also to her faith and her local community.  She deeply respected the dedication of her parish clergy.

Sylvia was an active member of church groups including the All Hallows Altar Society, working closely with her friend Myrtle Hughes and the then Parish Priest, Fr McCarthy.  Sylvia supported aged care at St Catherine’s, Balwyn as well as education causes.  On a future cold winter’s morning at All Hallows, you will be warmed by heating in the church donated by her and John.

Sylvia was practical, strong and busy with the important things of life.  This extended to her grandchildren Madeleine, Martin, Matthew, Estelle and Sebastian, who meant the world to her.  Her love of God was a source of energy in her life as she supported her family through the busy school years of the grandchildren.  This included the illness and sad passing away of Louise’s daughter Estelle at only eleven months of age.

Sylvia and John enjoyed a very happy marriage and successful life together.  They embraced rural life again with their farm in Gippsland.  This became a place of many family holidays together including the grandchildren enjoying the chooks, geese, horses and cattle.

Sometimes her affinity for raising cattle was dangerous.  Leaving the cattle yards one day after a sale, her choice of a floral umbrella in pouring rain attracted the ire of a cooped-up steer.  She survived being bowled over to the relief of her watching grandchildren.

Her love of gardening shone both at home and at the farm.  Sylvia also enjoyed holidays with John and her girls overseas in Europe, America and Asia.

Sylvia will be deeply missed by her family, especially her devoted husband John.  In August 2021, they celebrated 60 years of marriage.  In her last days, she was surrounded by John, Louise, Christine, Julian and her grandchildren.  She woke on the day before she died, and said “family” and hello to each and everyone there, suddenly clearly remembering faces and names and expressing that family meant everything.

God looked around his garden, and found a special place.

He then looked down upon you, and saw your weary face.

He put his arms around you, and called you home to rest.

God’s garden must be beautiful, because he only takes the best.

What a beautiful and moving tribute to Sylvia. May she Rest in the Peace which only Christ can give.