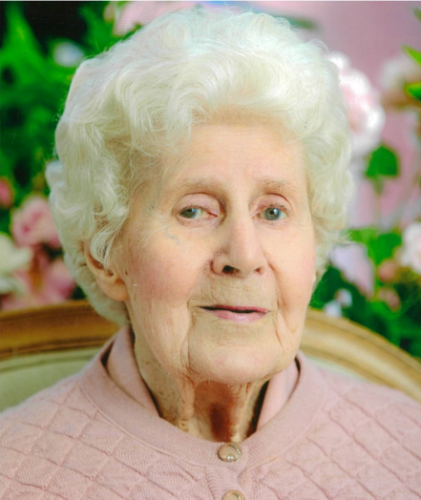 Kathleen Mary Ride was born in Benalla to Catherine Keziah Donchi and Edwin John Ride.  Her sister, Ellen Margaret – Marge – was born in 1917, Kathleen was born 22 September 1920 and a brother Edward John arrived in December 1921.

They lived in a two storied home with a large balcony overlooking Bridge Street, Benalla and although lacking the luxuries we take for granted today it was a happy, well cared for family.  Life was simple without fear of danger lurking about.  Their mother, Kitty, was a dressmaker and the children were always well dressed even in the difficult days of the 1930s Depression.

Kathleen said, ‘my mother was the greatest influence for good in my life and I constantly thank God for having given me such a good mother’.  Her father who had inherited the Ride soft drink factory, was a very quiet man who never raised his voice and left the formation of the children to their mother.

The three children all went to school at the FCJ convent.  There was only one lay teacher then, Maisie Dalton who taught Prep to Grade Two.

A great number of Kathleen’s happy childhood memories were connected with her father’s cordial factory where she was fascinated by the intricacies of the machines used to make the various soft drinks.

Another delight was visiting her paternal grandparents and visiting his maiden sisters.

When Kathleen turned six her mother took her to have her enrolled at Our Lady of the Angels Convent.  Kathleen recalled seeing her mother standing there talking with Mother Paula in the parlour of the convent, who was not very tall, was of medium build with very kind eyes and smile, thus beginning for Kathleen ten happy years of school life.  During Kathleen’s last year at school, she was taught shorthand, typing and book-keeping by an American FCJ, Mother Agnes Joseph Ryan whom she was to meet twice more when she went overseas.

Kathleen left school at sixteen and her mother found her a job at Rudin’s, a general department store where ladies and men’s wear was sold as well as other kinds of merchandise.  It was owned by a Jewish couple.  Later Kathleen became senior assistant and buyer, going to Melbourne to place orders for the coming season.  Then when the owners took their first holiday on a cruise in the islands north of Australia she was left in charge of the business.  She stayed with Rudin’s for nine years.

Kathleen enjoyed the social activities of the day, swimming, picnics by the river, tennis, bike rides, the Benalla Musical Society and she loved ballroom dancing.  She became engaged to a fine young man studying Agricultural Science but who was not a Catholic.  They planned to marry but his father who was a strict Freemason, found out she was a Catholic.  In those days of bigotry, the young man was sent far away.  Kathleen was devastated.

As time went by, she continued to enjoy dancing, fine clothes and the attention of young men but gradually these began to lose their allure.

After a social one night in St. Joseph’s Hall she was waiting for Marge to return the hall keys to the presbytery when she looked across at the FCJ Convent in total darkness but flooded in moonlight.  She heard, unmistakably she said, an interior voice say, ‘this is where I want you to be’.  She was filled with a joy and peace.  And she took that as God’s answer.  Kathleen told Marge on the way home who said to her, you’re mad!  The next morning, she told her mother and then went to visit the convent that evening.  By the time she did all that was needed, it was some months before she joined the noviciate.

On February 1, 1945 Kathleen went with her mother to the Richmond convent, carrying between them a large suitcase containing her trousseau.  As they walked along Waltham Street they noticed a young red-haired girl with a young man, also carrying a large suitcase.  Joan Duffus and Kathleen arrived together at the convent door, the young man being Joan’s brother Des.  That night was the first time Kathleen slept in a convent as she had been a day scholar at school.  The next morning, they went by car to Genazzano where they met three other girls, also joining the noviciate.

It was during her novitiate that Mother Mary Philomena conveyed the bad news to Kathleen that her father was very ill and not expected to live the night.  She said to herself, he will not die.  He is not a Catholic yet.  She didn’t cry, she said, but went to bed and slept well.  She had been praying since childhood to Mary, Mother of Perpetual Succour that her father would become a Catholic.

The next morning as she was about to go into Mass, she was told that they had just received news that her father had been baptised and received into the church.  Then, Kathleen said, I knew he was going to die.  It was the feast of St. Alphonsus, of the Redemptorists and the old missal often had a small picture of the saint but instead when Kathleen opened her missal there was a picture of Our Lady of Perpetual Succour.  Many years later she still felt the emotion of that moment.  Her father died and was buried from St Joseph’s, Benalla.  A group of children came from the school to form a guard of honour as the coffin was brought out of the church.

After five years training in England Kathleen returned in 1952 to teach the juniors at Genazzano and at Richmond.  Between 1959 and 1971 she taught at Our Lady of Good Counsel Primary School here in Deepdene.  Here she was asked to try out the system of teaching words in colour, a method just then being introduced into the school system.  She had great success with this and taught it for about 15 years

From 1971 to 1978 Kathleen was in Benalla.  Towards the end of this time she became seriously ill and after recovering, she spent a wonderful year at the Assumption Institute Course conducted at the Mercy Convent Rosanna, which was for her an unforgettable spiritual experience.

At the end of the course in November 1979 the Provincial of the day asked Kathleen to establish an FCJ Australian Archive, and to begin by setting up a Heritage Room.  Knowing nothing about archival management, yet seeing this as God’s will for her, she set about collecting information about FCJ history in Australia and she started with our time in Healesville where we had taken charge of the primary school from 1914 to 1924.  She stayed with two Sisters of St Joseph in the area and found some people who still remembered the FCJ sisters.

Back at Richmond, Kathleen set up the Heritage Room in preparation for the celebration of the centenary of the arrival of FCJ in Australia in 1882.  It was located in the convent and in 2004 was moved to its present location in the FCJ Province Centre.

In 1981, she attended a weeklong course on Archival Management given by an American Mercy Sister.  At the end of this course, she and Brother Kelty began organising a group to become the Association of Catholic Archivists Victoria.  Kathleen was elected the first president.

In 1986, Sr Marylin Matz invited Kathleen to Canada to set up an FCJ Archives there for the Canadian Province at Edmonton.  Though devastated at the thought and struggling with her work here she set out.  There she acquired great experience and training.  She found at Edmonton a handwritten account of the third party of FCJ sisters who came to Australia, which she brought back to Australia.

After fifteen months in Canada, she returned via England where she spent two weeks at Stella Maris and had permission to look for anything on the early history of FCJ in Australia.  Here she found letters written by Mother Mary John Daly who was the first superior in Australia in 1882, letters written back to the Superior General.  These tell of the financial difficulties experienced then and have been invaluable in writing our Australian history of the time.

Her happy childhood, her nine years working in retail and business management, dealing with the public, her busy social life, her joys and sorrows, all worked to form the religious woman she became.  A further 29 years teaching, with more skills acquired, prepared her well for the life of her later years.  Her attention to detail, her capacity for organisation, her thoroughness in all she did made her a successful archivist.

But, what she did was not who she was.

Kathleen was deeply spiritual.  At times one could feel she was somewhat difficult, stubborn or exacting.  Kathleen had the courage of her convictions.

In moving to the Moonbria Avenue Community, her 25 years involvement in the Australian Provincial Archives came to an end in 2004.  She was entering a new phase of retirement.  She now had no specific ministry.  She turned 86 years of age, but she still visited Prague House, a hostel for men next to St George’s Hospital where her brother, Jack spent his last years.  She assisted the Priest with the Mass by preparing large print copies of the readings for those able to participate.  She also supplied the music.

Kathleen was missioned to the Benalla Community in 2007 and was able to visit Marge who was now suffering from dementia in Coinda, a hostel for elderly and infirm in Benalla.

In 1990 she wrote the thought of death never frightened her and she prayed that God would continue to ‘let me know the shortness of this life that I may have true wisdom’. (Ps 90 v 12).

As she grew less able she went to MacKillop Aged Care facility in Hawthorn in June 2013 where she lived until her death on Easter Sunday morning.

May her beautiful soul rest in peace and joy in the company of the Father, Son and Spirit.

How lovely to read about Sr Kathleen Mary fcJ (Mother Perpetua) in the parish newsletter. Thank you! She was soo glad to have had that long experience of teaching at Our Lady of Good Counsel School and retained many of her friends from those days. The FCJ Sisters are always grateful for the support of the parish staff and Fr Brendan and Fr Trac. So gently and beautifully Fr Brendan anointed Kathleen in her last days and Fr Trac celebrated the Requiem Mass and burial prayers for her. OLGC is indeed blest in your vibrant parish, dedicated and competent staff and pastors...synodality in action! Blessings to all!