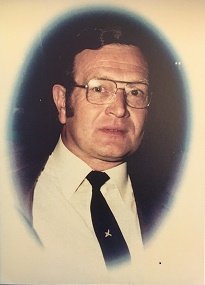 The following eulogy was given by his daughter, Kirsten St. John, at Our Lady of Good Counsel Church, Deepdene, on 27 July 2021.

It is said that over time, people will forget what you said and what you did, but people will never forget how you made them feel.

My earliest memories of my father are from the sixties. We lived in England, and it was there my brother and I were both born. I recall sitting on my father’s lap when I was very young and ‘driving’ the family car up the driveway. I also recall going for regular walks with my father along the country lane past the farms near our home in Stone with our family dog, a Staffordshire Bull Terrier called ‘Rusty’. My father had a big, strong physical and personal presence that made me feel safe and secure beside him. That same feeling remained throughout my life.

Joseph was born in Novisad in 1935 and later lived in Budapest, Hungary with his family. His father, Rudolf, was an industrial chemist, club football player and an athletics coach, and his mother, Elisabeth, was a midwife. The family was complete when his brother, Rudy arrived. At first World War II did not affect the family, but things changed once Germany occupied Hungary. After losing several uncles, their home and becoming separated as a family they were only later reunited when the war ended.

It was time to seek a better life. Joseph and his family came to Australia when he was 13 years old in 1948.  His family were part of the 170,000 people from post war Europe that migrated to Australia. The Hoffmann family arrived at Port Melbourne and were placed in Bonegilla Migrant Camp in North Central Victoria. Joe and his brother settled into Australian life and attended school at St Joseph’s in Beechworth.  Decades later my father would take my family to Beechworth to visit the nuns and I recall him and Sr Shanahan revisiting his youthful misadventures.  As a teenager he loved the freedom that came with living in a country town, the bush and a mother working night shift at the local hospital.

The Hoffmann family later moved to Brisbane and Joe attended Gatton College as a boarder. In his final year he was prefect and Dux and was an accomplished and popular sportsman, receiving awards for boxing, basketball, and soccer.  It was at college at a dance he met my mother, Oriel, who my father called ‘Blondie’ in those early years.

My father later said that one of most important things he learnt in college was to focus on what he wanted to achieve. The hardships his parents endured not only gave him the drive to succeed, but also provided him with the motivation to enjoy and experience all that life had to offer.

On completing college, he set himself new goals, making a decision to enrol in dentistry at the University of Queensland. In addition to his studies, my father became a heavyweight judo champion competing in the Australian University Games twice.

Many of Joe’s close friends, including Paul Flannagan, Peter Scott, Tony Carroll, and Peter Hellen, came from his university days.

In 1959, while still a student, Joe and Oriel married at Sacred Heart Church in Rosalie, Brisbane and moved to England following his graduation.  In my father’s usual style he left Australia with no firm plans, but by the time he landed in England he had a job in a dental practice lined up owing to someone he met on the plane.

After years of austerity, his work as a dentist in England allowed him new freedoms. In my early years, his outdoor pursuits included shark fishing off the Irish coast and deer hunting in Scotland. There always seemed to be another great adventure. In an old-fashioned sense, he was a man’s man with a love of hunting, fishing, and all manner of sports.

After life in the UK, my parents came to Melbourne joining friends including Graeme and Kenda Walker.

Joe and Oriel bought a block of land in Donvale where they built their house. One of Joe’s home projects included building a wine cellar. According to him this was a necessity in the days before table wine and wine merchants were common.  My father always had a unique and unconventional approach to solving challenges and this one involved using railway sleepers to build the cellar and large-scale wine bottling weekends.

For 38 years Joe worked as a dentist at his practice in Fairfield. Over the years, my father’s young patients grew up and had children of their own. They travelled, sometimes great distances to my father’s practice. By retirement Joe had looked after three generations of several families. Joe always enjoyed talking to his patients much to the distress of his dental nurses in charge of his appointment schedule.

In 1972 he purchased a farm in North-East Victoria. The rugged mountains reminded him of Scotland and the views from the highest paddock provided an incredible panorama of the Snowy Mountains.  Over time, Joe’s farming enterprises expanded, and he developed an obsession with Poll Hereford cattle. This was unconstrained by practical realities, which were often left to my mother. My father had a keen eye for quality cattle culminating in success at the Sydney and Melbourne Royal Shows.

As a father, he enriched our childhood with experiences. We spent time with many iconic Australians including authors, painters, and restauranteurs, as well as cattlemen and women in the Victorian high country. At the farm he would ensure that we didn’t miss a spectacular night-time sky, the sunset, and the moon rise.  Many evenings were spent sitting out on the driveway watching the nightly show unfold.

Joe was close to his brother and his daughters, his sister-in-law Val, and especially proud of his four granddaughters, Kathryn, Jess, Amanda and Alex.  He followed their achievements from walking and talking to studying at school and university.  He was keenly interested in their sports and would often spontaneously appear with my mother at the local athletics track.

For friends and family who had a difficult time he could respond with unpredictable gestures of kindness.  Many speak fondly of a time when Joe connected with them in this way.  He had a way of picking up a conversation from where it may have left off months, if not years, earlier.  He could connect with people from all walks of life and saw the best in everyone.  He wanted to hear what you had to say.

My father would want me to finish on a happy note and he was one to share a laugh and a joke.  To that end, I can tell you that Sr Shanahan from Beechworth knew exactly who was responsible for the firecrackers thrown on the convent roof.

He wore his mischief and his noncompliance as a badge of honor.