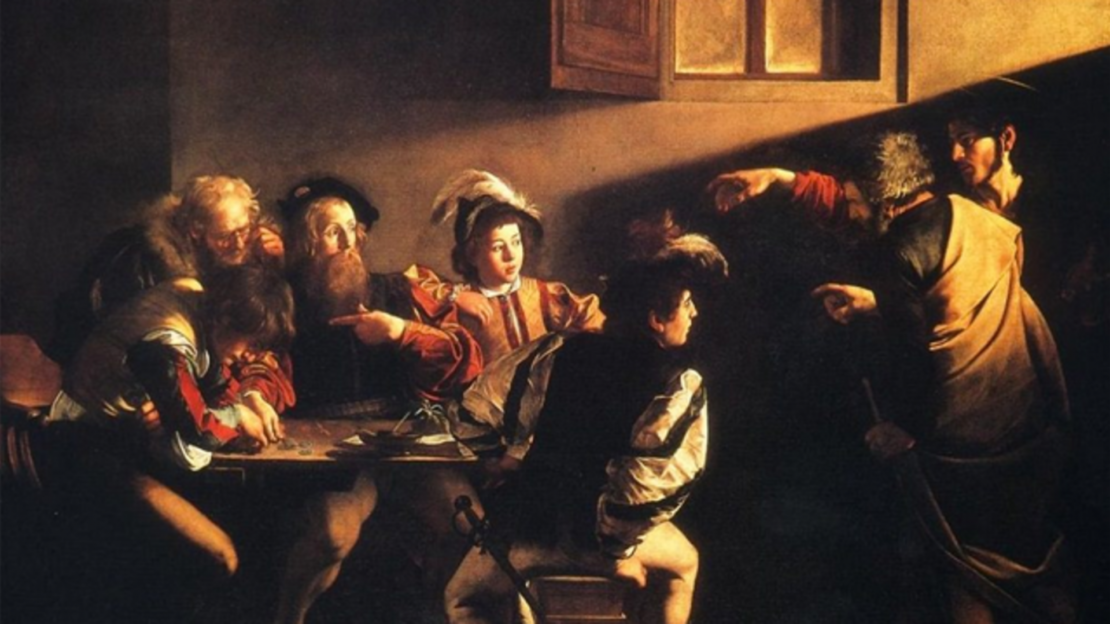 The feast of St Matthew is celebrated on 21 September.

We know that Matthew was a tax collector (Matthew 9:9).  Tax collectors or publicans, as they were called, (not to be confused by those who go by that name today), were despised by the people of Jesus’ place and time because they were collaborators with the Roman occupying forces and were known as money-grabbers.  They were permitted to collect more than the set amount of tax as their way of making money.  Understandably they were not popular!  Matthew was one such man and he was called by Jesus, which would have been to the surprise of everyone.  Matthew took up that call and followed Jesus.  We know virtually nothing more about him.

We have Matthew’s Gospel of course and it has a quite particular character.  Matthew wrote for Christians who had a Jewish background and this is apparent in his gospel, for instance he never explains Jewish customs as those he is writing for know all about them.  There is even an ancient tradition that there was an earlier and shorter version of Matthew’s Gospel in the Aramaic language – the language that Jesus himself spoke.

We can catch a sideways glimpse of very early Christian history by comparing Matthew with Mark and Luke and with the writings of St Paul.  In those very early decades there was a transition going on within the Christian movement and that transition caused heated disagreements.

Jesus as we know was Jewish and all his earliest followers were Jewish.  So the question arose as to whether Christianity should continue to be part of Judaism?  Was it to maintain the culture and religion of Judaism or was it to go beyond that religion and culture?  Given that so many of the followers of Jesus were Jewish and their Judaism was precious to them, were they simply to take their seats alongside pagans who had become Christians and who had none of the background that was theirs and had been that of Jesus himself?

This issue caused great disagreement among those early Christians.  The disagreements were very heated as we can see from the letters of St Paul.  Matthew was dealing with a community made up largely of people of Jewish background but he was also intent on getting them to see that they needed to be open to receiving among themselves Christians with a pagan background.

Mark and Luke in their gospels are speaking to Christians from a pagan background, that is they had been converted from paganism rather than Judaism.

This disputed issue involved a radically important question: was Jesus Christ for all human beings (“the many”) or just for those who belonged to the Jewish faith?  In the opinion of those who thought Christianity should remain part of Judaism, pagans could become Christians but first they would have to become Jews and then become Christians.  This would have involved the keeping of all the Jewish religious regulations.

The view that ultimately prevailed was that people from all backgrounds could become Christians directly.  Jesus Christ had fulfilled and surpassed the old testament.  Christians were in a new tradition.  St Paul was the great advocate of the universal meaning of Jesus the Christ.

In chapter 15 of the Acts of the Apostles there was a gathering of the Christian leaders which addressed this question and sealed the direction of the early Church into the future.  Christ would be proclaimed to all who were invited to join the community of his disciples.

One of the important principles to be drawn from that very early disagreement among Christians is that all questions were not settled by Jesus from the very beginning.  The implication of that is that we have to apply his words to our contemporary issues too.   All through our history new questions have arisen which cause disagreement and heated argument and we have to address these questions and find responses to them by reference to what we have in the Scriptures and what has been sorted out in the course of the long Christian tradition.  There are always new questions and issues that emerge and we have to take them seriously.

Thank you Fr. Frank for your clear explantion of the context in which Matthew's gospel was written. It is very helpful to a better understanding of Matthew and of making itis message relevent in our contemporary situations.