Camberwell Parish (Basilica of Our Lady of Victories) 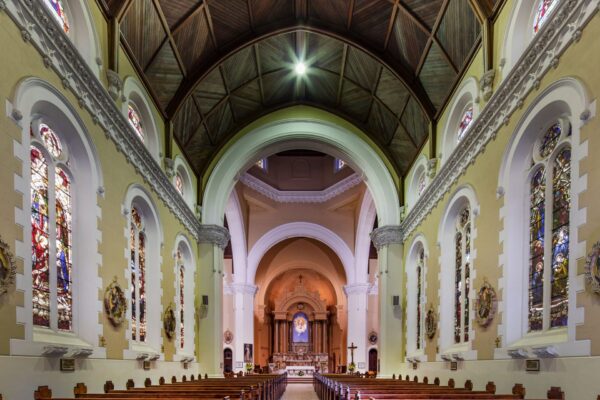 At the turn of the century, when the tide of earlier economic woes in colonial Victoria had begun to turn around, Fr Robinson planned the church as a large national shrine. He was an experienced and successful fundraiser and he organised lectures, concerts and a national appeal for donations. By 1913, the parishioners and Fr Robinson had raised £12,000, enough to commence construction of the church. The foundation stone was laid on 25 May 1913 by the then Archbishop of Melbourne, the Most Rev. Thomas Carr DD, in the presence of 45,000 people. 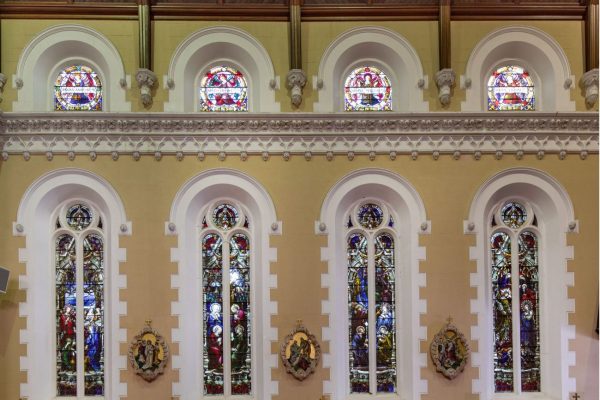 The diocesan architect, A A Fritsch, drew up the original plans, many of which were modified, possibly because of costs. Responsibility for the project was passed to the builder, Robert Harper.

On 6 October 1918, Our Lady of Victories was opened by the then Archbishop of Melbourne, the Most Rev. Daniel Mannix DD, with 80,000 people in attendance. Special trains and trams had to be provided. Just prior to this event, Father Robinson altered the parish name to Our Lady of Victories. 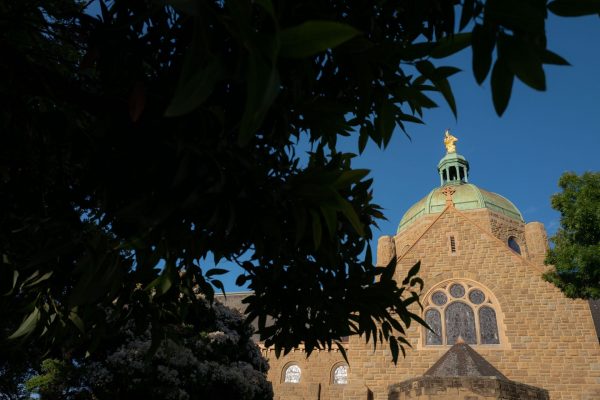 The church is built of Barrabool stone, from Waurn Ponds, Geelong. The most prominent external feature is the cupola – the rounded copper dome adorning the church roof. It is a notable landmark that has been a significant part of Camberwell’s landscape for over a century. The statue of Mary on the cupola is 3.7 metres tall and stands 50 metres from the ground. It was carved in wood by Signor Vincenzo Cadorin, of Venice, and is clad in copper gilt. It was placed in position in 1916, two years before the Church was officially opened.

Installation of the suite of stained glass windows was completed over several years, finishing in 1924. There are forty-three windows made by the factory of John Hardman, in Birmingham, whose work is also to be seen in the British Houses of Parliament and in many churches in the UK and the USA. 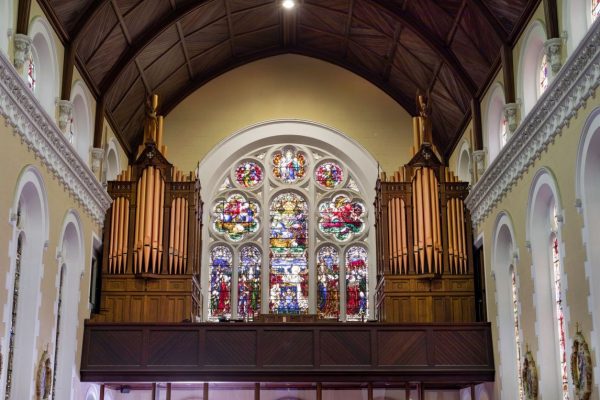 The organ was built by T W Magahy & Son, of Cork, Ireland in 1920 at a cost of £3,000. It was at the time the largest parish church organ in Australia. Magahy himself launched the organ with a series of recitals in 1921. It was rebuilt in 1980 by George Fincham & Sons Pty Ltd, with more recent tonal modifications, particularly to the reed stops made by Australian Pipe Organs Pty Ltd. It is an instrument of forty-four stops divided over three manuals and pedals and has a total of approximately 3,000 pipes. As well as performing an important role in the liturgical life of the parish, the organ is an outstanding recital instrument and has hosted performances by leading international and local performers.

Now, close to 100 years since the church was built, the ravages of weather have softened the stone. Expert examination in 2012 identified that replacement of many blocks was warranted, initially to the front facade, then to the dome and two transcept areas, and in time to the nave section. Repair of the dome section was completed mid 2016. In addition to the stone replacement work, the opportunity was taken to repair parts of the roof, roof plumbing and glazing, along with upgrading lightning protection to meet current code requirements. Funds from the sale of the OLV tennis court site in Seymour Grove covered most of the costs, with a 20-year loan taken through the Catholic Development Fund to ensure all works were completed.

The Battle of Lepanto took place on 7 October 1571 when a fleet of the Holy League, a coalition of Spain, Venice, the Papal states and others, under the overall command of Don John of Austria, an illegitimate son of the late Holy Roman Emperor Charles V, decisively defeated the main fleet of the Ottoman (Turkish) Empire.

The five-hour battle was fought at the northern edge of the Gulf of Patras, off western Greece. The Empire lost all but 30 of its ships and as many as 30,000 men, and some Western historians have held it to be the most decisive naval battle anywhere on the globe since the Battle of Actium in 31 BC.

The loss of so many of its experienced sailors at Lepanto sapped the fighting effectiveness of the Ottoman navy, a fact emphasized by their avoidance of major confrontations with Christian navies in the years following the battle. Historians note that the Turkish defeat stopped Turkey’s expansion into the Mediterranean, thus maintaining Western dominance, and confidence grew in the West that Turks, previously unstoppable, could now be beaten.

After the battle of Lepanto, Pope Pius V, instituted “Our Lady of Victory” as an annual feast to commemorate the victory. The Pope had previously called upon Catholics to invoke Mary’s assistance so that the Turkish threat may be averted.

Immediately afterwards the Pope inserted the title “Help of Christians” into the Litany of Our Lady as it was believed that the threat of invasion had been averted through Mary’s intercession as a rosary procession had been offered on that day in St. Peter’s Square in Rome for the success of the mission.

So the name “Our Lady of Victory(ies)” has a certain synchronicity with the title of Australia’s Patron “Our Lady Help of Christians.”

The school started life as St John Berchman’s School in the 1890s. Few references to the school can be found in the first decade of its existence.  The Sisters of the Faithful Companions of Jesus (FCJ) administered the school from 1897 through to 1902, travelling daily by train from Vaucluse, in Richmond.

In 1904, the Josephite Sisters began their 75-year association with the school. They travelled daily by train from their Surrey Hills convent until 1907, when the parish rented a house for them in Alma Road. The Josephite Sisters later purchased a home in Havelock Road Hawthorn East (1910), now the site of the Mary MacKillop Aged Care Facility.

The increase in enrolments in the early decades of the school’s existence necessitated the construction of new infant school classrooms in 1910, followed in 1923 by the construction of the first stage of a new brick school. The parish and parishioners experienced considerable financial hardship in this period, as did the sisters, who were totally dependent on the local Catholic community for their income. In an attempt to maintain the school during the Depression years, a variety of social functions and fundraising events were held at the school site. It quickly became an important and highly valued gathering place for the parish community.

In the 1950s, Our Lady of Victories was not exempted from the state-wide crisis of reduced school resources and finances caused by post war immigration and a shortage of teachers. Another challenging time occurred when the Sisters of St Joseph could no longer sustain their presence in the school, largely due to reduced vocations. They withdrew in 1978. Their legacy continues to be honoured and remembered in the hearts and memories of many past pupils and in parish celebrations.

Significant demographic changes in Camberwell began to occur in the 1990s and beyond. Over time, declining enrolments left the then parish priest, Fr Michael Morgan, with no choice but to close the school. This occurred in December 2014. The school site was subsequently leased by the Department of Education as an additional campus for Camberwell Primary School. This leasing arrangement is ongoing. 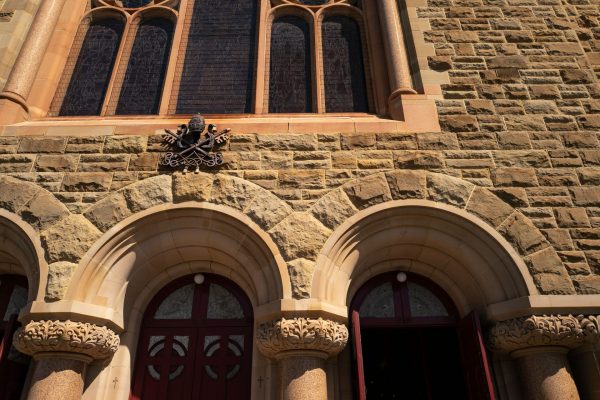 On 9 December 1996, Pope John Paul II proclaimed Our Lady of Victories church to be a Minor Basilica.

Since the Second Vatican Council, a church may be declared a’ minor basilica’ if it meets a number of criteria:
• it must be a dignified and attractive building with an active liturgical life;
• a number of specific feasts and liturgies should be observed;
• the basilica should lead in liturgical music. 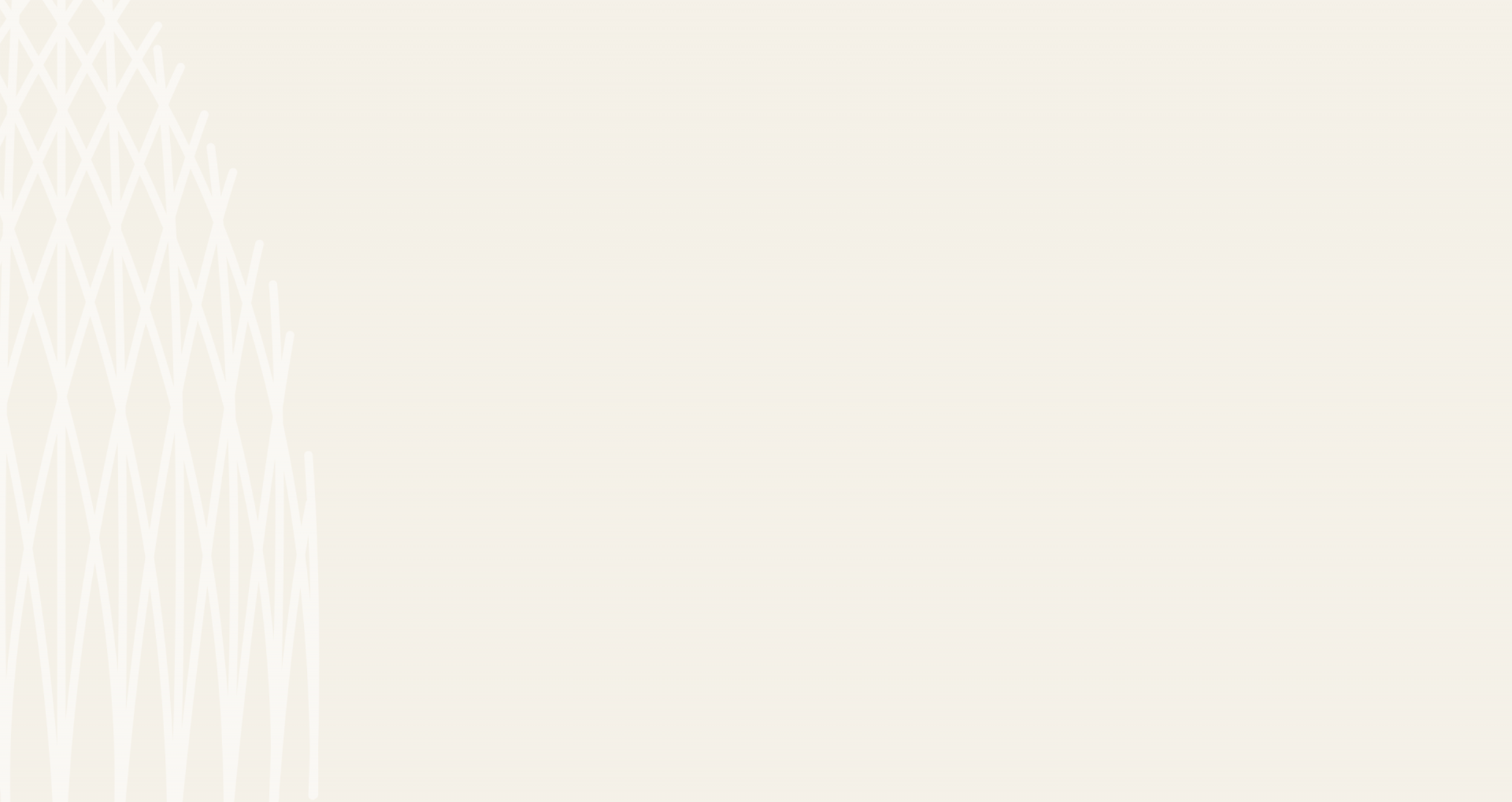 What is a Basilica?

The Latin word basilica was originally used to describe a Roman public building, usually located in the forum of a Roman town. Public basilicas began to appear in Hellenistic cities in the 2nd century BC. Basilicas were also used for religious purposes. In Roman times, a basilica meant an oblong hall with a double row of pillars and a semi-circular apse at the end, used as a court of justice or for formal administration. From the time of Constantine, after the Roman Empire became officially Christian, the Eastern Roman Empire remained essentially Hellenistic and the Emperor in the East became known as the Basilieus. Greek rather than Latin was the Lingua Franca. The term Basilica came by extension to refer specifically to a large and important church that had been given special ceremonial rights by the Pope. Thus the word retains two senses today, one architectural and the other ecclesiastical.

Many early Christian churches were built in this style, but in Rome the term ‘basilica’ was reserved for the seven principal churches founded by Constantine. A basilica is entitled to use the papal insignia of St Peter’s crossed keys. Usually these are placed above the main entrance of a basilica.

As noted earlier, Camberwell was initially administered by the Jesuit fathers. When a combined church-school was built on the Camberwell site in 1887, the parish was named after a recently canonised Jesuit, John Berchman. In 1918, Fr Robinson, the third parish priest appointed to Camberwell, altered the parish name to Our Lady of Victories.

Like Our Lady of Good Counsel (refer Deepdene Parish History), Our Lady of Victories was widely used in earlier centuries to commemorate the 1571 battle of Lepanto. At this time, during the pontificate of Pope Pius V (1566-1572), the Ottoman Turks had become a serious threat to Christian nations. They controlled maritime power in the Mediterranean and regularly raided the coastal cities of Italy. The Venetians appealed to Pope Pius V and proposed the Holy League of Christian powers in a crusade against the Turks. On the morning of 7 October 1571, Christian and Turkish fleets engaged in battle, with the Christians prevailing in victory. On the very same day, the Rosary Confraternity of Rome met in a Dominican church to pray for the victory of the Christian forces. When the news of victory did reach Rome, it was attributed to the intercession of Our Lady. In commemoration of Lepanto, Pope Pius V established a feast in honour of Our Lady of Victories. Later Gregory XIII changed it to the feast of the Most Holy Rosary, celebrated on 7 October.

The foremost shrine of Our Lady of Victory (or Victories) is in Paris, the cornerstone of which was laid by King Louis XIII in 1629 in thanksgiving for the rout of the French invaders.

Parish Priests of Our Lady of Victories