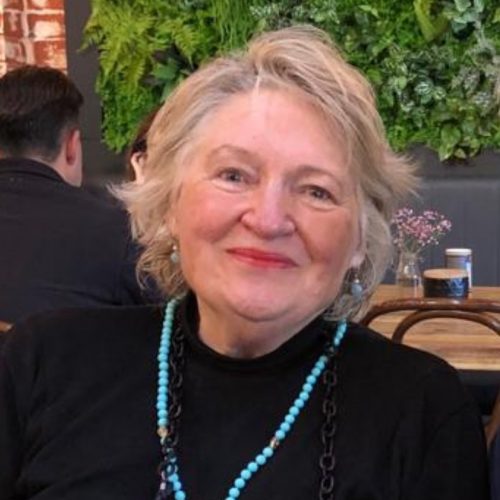 The following is an edited version of the Eulogy delivered by Helen’s family at her Funeral Mass on 20 May, 2020.

Helen was born on 10th December 1940, the only child of Carmel and Frank Millane. She lived her life here on earth every bit as fully as her parents could have imagined. Mum had strong Irish Catholic lineage – Frank’s family were Millanes and Sullivans. Carmel’s mother was a Murphy, all of whom immigrated from Ireland and converged on northern Victoria during the 1850s gold rush era.

But it was the Cavagna bloodline of which Mum seemed most proud. Her great grandparents Giuseppe and Maria Cavagna were Swiss-Italians who emigrated to Bendigo in 1855. Mum really did love her bit of continental European heritage!

A particular influence on Mum’s life was her education at St Ursula’s in Armadale, NSW. The Ursulines were founded in Brescia Italy, which further fed her passion for continental Europe. An Ursuline saying encapsulated Mum’s philosophy on life: “Never cease to cultivate the vine. After that, leave the rest to God to work his wonders at the time he finds best”.

It was at St Ursula’s that Mum met two of her life-long friends – Maree Byron and Mel Williams. Over their school years Helen, Mel and Maree became a trio and the bonds have endured throughout their lives.

Helen met Richard, our father, at a Victorian Catholic Lawn Tennis Association ball in 1964. Helen was a member of the Kew Catholic Tennis Club and played with Dad’s cousins Julie and Margaret Chamberlain. They introduced Dad (who grew up in Essendon) to a very sophisticated Helen who swept him off his feet. They courted for a short time, became engaged and were married at Our Lady of Good Counsel Deepdene on 31st July 1965 with Julie and Margaret as bridesmaids and a reception held at the Windsor Hotel.

Shortly after their marriage they moved to Colac and built a new house – Mum’s edgy style first reared its head when she was determined to have Alaistair Knox house complete with recycled bricks from an old hotel in Colac. It was suggested by a concerned neighbour that they were putting up a chicken run!!
Richard and Helen commenced their 13 years of child bearing shortly after arriving in Colac, with Matt being born in 1966 to Felic in 1979.

The family eventually out grew our first home and relocated to a large sprawling Victorian home in town. Helen loved the ‘The Elms’, with its gardens that were in need of hours of nurturing and its close proximity to St Mary’s Primary School and Church. One of the joys of being in town for Dad was being able to walk home for lunch each day, to his lovingly prepared 2 rounds of sandwiches and piece of homemade cake.

Helen loved the garden, the kitchen and the family and she always ensured we had a delicious meal every night, sitting up in the ‘big room’ at the table with two leaf extensions, wonderful meals and always dessert (or at least ice cream with milo).

In fact Matt did some maths on the number of meals she prepared with love for us. For 25 years she fed an average of 4.5 people for 3 meals a day 7 days a week (with the exception of Fish & Chips on Friday night) 136,000 meals but probably closer to 150,000 given the number of visitors which were also welcomed in.

In 1991, Mum and Dad left Colac for Geelong. They moved to Barwon Heads for a sea change and then finally settled in Melbourne – the place Mum had been trying to get back to, some 30 years after she’d agreed to doing a short stint in the country!

They were married for almost 55 years. Together they were lovers, friends, parents, grandparents, parents in law, parishioners, neighbours, and friends to others, and of course they were providers. First Richard was the provider, funding and educating seven children, and Helen the homemaker, feeding and raising them. Then Helen became the provider and Richard the retired home-dweller!

With seven children to raise, you might have thought that Mum had enough on her plate – but at around age 40 with a two year old, Mum decided to go back to Uni: a pursuit which required attending a weekly class in Geelong. This meant big changes in the family. Dad had to step up and cook meals with help from Jules and from this a new rhythm was born – Helen became a working mother.

After attaining her Bachelor of Arts and Graduate Diploma, Mum began working in special education, for Catholic Education and remained in this for over 10 years. She then became the Catholic Chaplain at Deakin University for almost 20 years; firstly, at Geelong then at Burwood. She loved this work particularly meeting students from other countries, and she made some wonderful friends with the staff advising them about life. Mum just loved people, and people loved her. John Devereaux, the head of Student Life at Deakin said: “Helen displayed compassion, love and genuine respect for diversity. I will always be grateful for her wise counsel and unfailing spirit of generosity.”

Mum retired in April last year – aged 78 years. It seems incredible that this woman raised seven children and then went on to have a long career in Special Education and Pastoral Care. Mum knew how to really play to people’s strengths which is a gift that all of us are still trying to perfect and she taught us all the value of lifelong learning and development – not through instruction, but through her example. She was truly an inspiration to us all.

Reflecting on her life, Dad thought of Chris Lowney’s words “Why not contribute your energies to make us better people through your coaching, love, inspiring example or noble mission? Instead of trying to win the race, why not make it your mission to contribute to the race, the human race, by making your corner of the world more just, more loving and more happy”.

Of course, Mum’s ultimate test was Motor Neurone Disease. Diagnosed 3 years ago, she fought the disease with dignity to the end. Dr. Dominic Rowe advised Mum that this would be a crucible for the family ‘a severe test and a time where great changes take place, but where something more beautiful is formed in the end’. Dad was devoted to her all his life and especially in Mum’s last illness. When Mum was sick he said “I’ve never loved your mother more than I love her now”. As Mum’s illness took hold, her need to keep control manifested in many and varied small requests, all of which Dad would dutifully attend to. When they went into The Gables and we went through the recent lock-down, Dad was there by her side, showing his love and devotion to Mum through each day and right to the end. It was lovely to witness.

For Mum, family and getting along, acknowledging some relationships are stronger than others and being able to see the good in everyone were very important. This has been very evident in the last few weeks. Her illness and death provided the final test for us to show her that we truly got her message. She had a unique skill, of making all of her children and grand-children feel special – at the moment she was talking with you – like you really were her favourite. And at that very moment – you really were.

Thank you, Helen for your life; for never ceasing to cultivate the vine. Now you are leaving the rest to God to work his wonders, at the time he finds best.