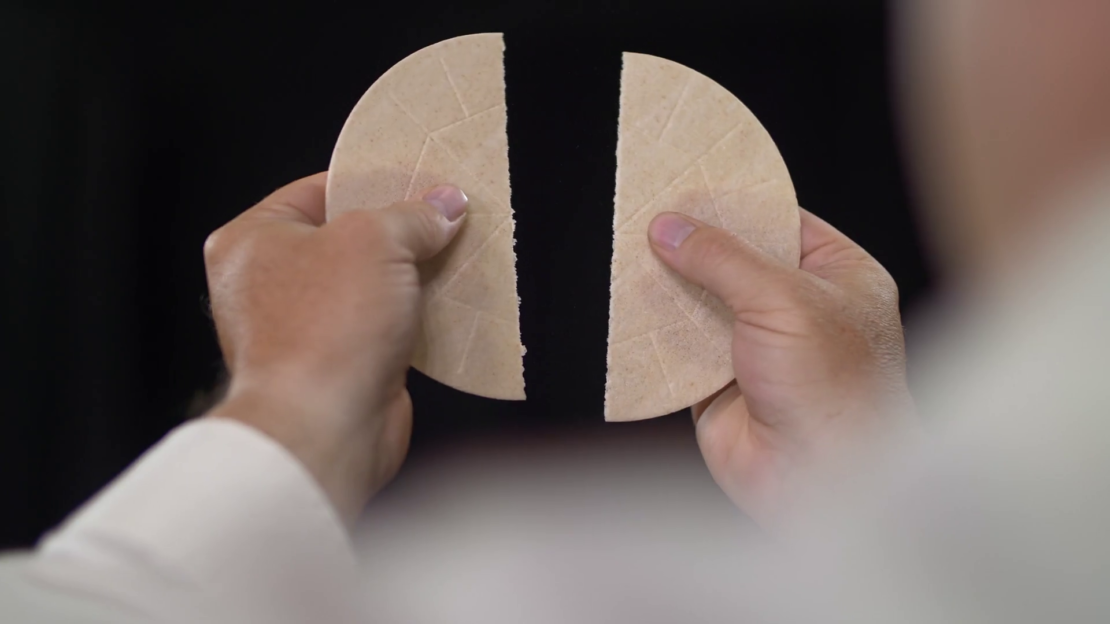 The Breaking of the Bread

This part of the Mass has been neglected for a long time.  Breaking the bread was one of the core actions of Jesus at the Last Supper: he took bread, said the blessing, broke the bread, and gave it to his disciples.

Originally the setting for the Last Supper and that of the disciples’ earliest Eucharists was that of a small group of people.  The bread that was used was of a sufficient size for it to be broken into enough parts so that everyone present would be able to have a piece of the broken bread.  This is more difficult for us today but, as you will have noticed, efforts are made to have at least one large bread which can be broken into parts to be shared by at least some of those present.

This is a highly significant symbol in the liturgy of the Mass.  It is a sign of unity and communion.  We share in the one loaf, that is we all draw life from the same source of life – the death and resurrection of Jesus.  As St Paul says in I Cor. 10.16-17: “Is not the bread we break a sharing in the body of Christ?  Because the loaf of bread is one, we, many though we are, are one body, for we all partake of the one loaf.”  So the breaking of the bread is an integral part of communion: the bread is broken so that we all may have communion in it.  The Eucharist is our communion in and with the risen Lord.  We must not reduce it to “my” communion.

While the bread is being broken, we sing the ‘Lamb of God’.  The paralleling of the breaking of the bread and the Lamb of God is also very significant.  Using the image of the Lamb of God sends our minds to the death of Jesus, to him who shared our sufferings and our death and leads us through them into the new life of resurrection.  He is the Lamb of God who takes away the sin of the world, by which the Scriptures mean our separation from God and he brings us God’s peace.  We are in communion with God in Jesus.

So as the bread of the Eucharist is broken it is also a sign of the broken body of Jesus on the cross, that broken body which is now risen.  And in the broken bread we enter into communion with the risen Jesus who feeds his new life into us.