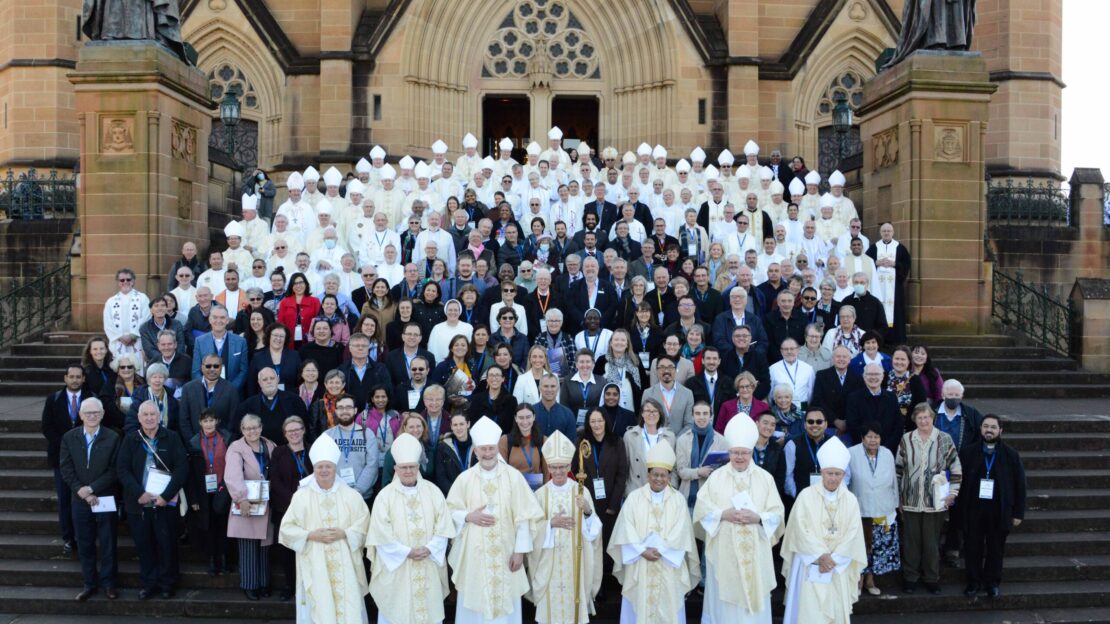 Women and the Plenary Assembly

“Our God is a God who cares, heals, guides, directs, challenges, confronts, corrects. To discern means first of all to listen to God, to pay attention to God’s active presence, and to obey God’s prompting, direction, leadings, and guidance.”

For the last four years many of us have been engaged in this deep process of straining to hear God’s voice as we have tried to discern what it is that God is asking of our Church in Australia at this time. We have been listening with the ear of the heart, the mind of the believer and the eye of the times for the Spirit. The process has exposed the deep divisions which we know exist in this big church of ours with fault lines being made visible as we have tried to bring our life experience into conversation with the world of the church. For many this has been a struggle – but all who have grappled with the process (or not) and all who are disappointed (or not) with the outcomes have, I think, one thing in common: they love their God, and they desire only the very best for their church.

In Let Us Dream, Pope Francis writes ‘What is under discussion at synodal gatherings are not traditional truths of Christian doctrine. The Synod is concerned mainly with how teaching can be lived and applied in the changing contexts of our time.’ (Let us Dream, p.93).  The challenge of this was evident on the floor of The Second General Assembly of the Fifth Plenary Council of Australia last week: How are we to live as 21st century followers of Jesus?

Most of the attention from the Plenary has encircled one of our fault lines – the role of women in the Church. So, from one who was there, this is my reflection.

We know that a consistent theme that emerged from participants in the first phase of the plenary council was the role and participation of women in the Church. This was usually couched in terms of recognition for leadership, participation in governance and acknowledgement of the leadership role that many women do currently play in their church communities and organisations. The working document for the Assembly (Instrumentum Laboris) had two paragraphs which particularly addressed this, noting that despite the significant contribution and role that women play in the Church in Australia the perceived ‘underrepresentation of women in formal leadership and decision-making roles is a challenging issue for many in Australia. So too, for some, is the exclusion of women from ordained ministry, notwithstanding the Church’s formal teaching on this matter.’ (Continuing the Journey Instrumentum Laboris (working document) for the Fifth Plenary Council of Australia n. 54; 55).

From this (and other feedback) two motions emerged for voting at the plenary on the theme of ‘Witnessing to the Equal Dignity of Women and Men’. On Tuesday, 5 July, the motions were put to the assembly: one received a majority on the consultative vote and on Wednesday did not receive the qualified majority on the deliberative (bishops) vote. The other (4.6) did not receive the qualified consultative or majority vote. (Final Voting Outcomes for the Fifth Plenary Council of Australia – July 6).  Given that the two motions that referred to women in the Church did not receive a deliberative vote meant that the assembly would, in the end, be making no comment about the dignity of women and men in the Australia Church. It is this, I think, that caused the distress.

I think many were surprised by the results of the qualitative vote which then became shocked at the results of the deliberative vote. There was no formal stand up at the back of the room; it was more that after morning tea many of us (women and men) did not feel quite ready to go back to the tables and resume the program that was set. There was no walk out as far as I could see. It was certainly uncomfortable and not all women were at the back of the room. It was a reminder, I think, that not all women agree about the future either!

But what broke my heart was the distress of the young women. This handful of 20- and 30-year-olds in attendance were devastated. I was surprised but not surprised by the way the votes fell because I have spent most of my life working at the edges of the Church and carry, I think, a greater acceptance of the divisions that rise when matters such as the role of women are discussed. There is a group amongst us who, whenever the topic of women in the Church is raised, hear it as a slow chipping away of priestly authority leading to women’s ordination. I would suggest that a far more nuanced approach to the conversation is required. And, I trust in the work of the Spirit in prayerful discernment.

The process of the assembly was then altered to think and reflect on what it was that as a Church we wanted to say about the dignity of women (and men). Some have interpreted this as not accepting the will of the Spirit. However, my sense would be that if the good Spirit had been at work, the assembly would have felt a sense of peace, kindness, gentleness – that is evidence of the fruits of the Holy Spirit. This was not evidenced at the assembly. There was no peace of heart.

On the final day of the assembly the next iteration of the motion was voted on (Final Decree 4 Witnessing to the Equal Dignity of Women and Men). Some see it as a compromise and a watered-down version of the original – but I see it as an example of the fruits of grappling with a fault line that led us to reflect more carefully the love of a God and a desire only the very best for the flourishing of our church.

A defining memory of the assembly for me is the room of round tables with bishops, ordained and lay people all straining to hear each other in honest dialogue. Were there tensions, yes. Was their joy, yes. Will it make a difference – I think so. The Church of Australia, under the leadership of the bishops, has taken a brave step into the world of synodality – the fruits of which are yet to unfold.

Dear Cathy, My sincere apologies for calling you Elizabeth! I grew up with a Jenkins family and among the 7 children was a Cathy and an Elizabeth. (Elizabeth was the closest to me in age).

Not a problem at all Kerry! and thank you for your feedback.

Thank you very much Cathy for sharing your insights about the Plenary Council and the process - particularly regarding the role of women in the Church. Whilst my 30s and 40s are in the past I understand the distress experienced after the first vote.
We can only pray for a better future.

thanks Lyn - I appreciate your thoughts.

Thank you, Elizabeth. This is a very important issue and needs careful, deep and prayerful thought.

thanks for the very considered article