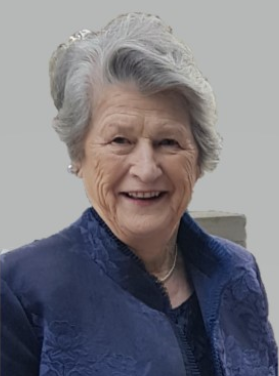 Jan Bilston was born in Geelong, the third child of Robert and Delia FitzGerald who were both schoolteachers. She was predeceased by her brother; Barry and she is survived by her older sister Brenda. After moves from Geelong to Bendigo and Merbein, where Jan attended Our Lady of the Sacred Heart School, the family moved to Melbourne. Jan made her First Communion at St Raphael’s in Preston and later attended CLC. She finished her schooling at Our Lady of Sion, after the family moved to Blackburn. At Sion, Jan was the Sports Captain and won a number of academic awards. Three generations of the family have now attended Sion.

On leaving school, Jan worked at the ES&A bank and then for more than 20 years, she worked at the Billings’ Family Life Centre, as an administrative assistant. Her colleagues have spoken of her unfailing good humour and gentleness.

Jan’s happiest childhood memories were at Springhurst on the FitzGerald farm with her grandfather and her aunts, Anne and Bess. They were spoilt with white bread and homemade butter and cornflakes with homemade fresh cream. This was a very big deal because at home it was brown bread and porridge. There was a huge vegie garden on the farm and many animals including dogs, chooks, lambs and cows that were all named and dearly loved. Even though there was no gas, electricity or running water Jan often said that they were the best of times.

Jan and Jim met at a dance at Ziegfield’s Dance Hall and were married in 1959. Their first home was at 6 Maxia Road, East Doncaster where they spent 45 years. They were the first to build in the street in what had previously been apple orchards. Doncaster then was a city of dirt roads – dusty in summer and sticky mud in the winter. Milk was delivered by horse and cart and bread by a van. As more houses were built, Jan made friends with the women in the street and they have enjoyed meeting for Christmas every year since. One of those friendships was with Pam Toohey. They were opposite in personalities but shared a decades long friendship enjoying many laughs together.

Jan and Jim were heavily involved in the new East Doncaster Parish. Jan played tennis at the parish and she volunteered in the tuckshop of St Peters and Pauls school. When they moved to Our Lady of Good Counsel in Deepdene in 2004, the parish priest at St Peters and Pauls wrote in the parish newsletter that he was asking the Deepdene Parish for a $50,000 transfer fee, such had been their contribution to their parish for 45 years. Jan and Jim continued their long friendships with the Tooheys, Walshes, McArthurs, Chambers, Arters and many more after their move.

At OLGC, they immediately became involved in parish activities. Jan helped to run a program for elderly parishioners and later joined Jim in the St Vincent de Paul Conference. They derived a great deal of satisfaction volunteering visiting the poor in inner city Melbourne and at the Vinnies shop in Auburn Road Hawthorn where they made many firm friends.

At Our Lady of Good Counsel, they met Joan and Lindsey Burnside and a firm 16-year friendship was formed. They shared much in common and volunteered together. Jan and Joan were a great support to each other, making meals for each other during times of hardship. Joan recalls Jan’s incredible grasp of the English language, which was manifested in various verses she wrote for friends and loved ones beautifully depicting their characteristics.

“both Mum and Dad were very supportive parents – they helped me on my weekly paper round in the depths of winter – in the cold and dark and would drive and collect us from anywhere anytime. Mum was an amazing knitter. Her last piece was a bonnet for her soon to be born great grandchild. Mum taught Janine to knit and Janine has carried on that love. Mum was also handy with a needle and thread and sewed many callisthenic costumes for her granddaughters.

Mum was a great cook and for our birthdays would always cook our favourite meal followed by dessert and cake, and the school fete was always well supplied with her most delicious toffees and cakes. Her Anzac biscuits, rocky road and peanut brittle were legendary. She made delicious relishes and jams, her quince jelly and apricot jam were favourites. Mum passed on her love of cooking to Liz.

Mum was always on our side or at least sympathetic to us, and most of all, she always supported us. She had a quiet, confident, calm nature about her when you were asking for advice. Peter and I often pushed the boundaries with our escapades, and she told us that we were the ones who gave her grey hair but she never lost her calm with us, she was always thoughtful and generous. Mum and Dad would often babysit the grandchildren, playing endless games, telling stories and singing songs. When we went on holiday, the fridge was always stocked on our return.

Growing up we had many happy memories of our cousins coming to visit at Maxia Road. Our cousins remember mum as gentle, gracious, kind and generous. They remember Mum’s laugh, great sense of humour and her wry smile that let you know when you had done something wrong”.

In their retirement Jan and Jim took up golf which they enjoyed playing with their Deepdene friends and family. As recently as a few months ago Jan was working in her garden, of which she was very proud and gardening brought her much joy particularly when Jim became unwell.

Jan and Jim were married for 60 years and Jan was very proud to have received certificates from the Pope, the Queen and the Prime Minister, on the occasion of their 60th Wedding anniversary.

Our dear, beautiful, kind mum, we miss you so much already.
You will be in our hearts forever. May you rest in eternal peace.