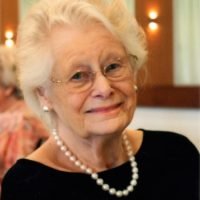 Valerie was born almost exactly mid-way between two World Wars into a British naval family in the shipyard town of Barrow in the northwest of England.  Her father, Albert Edward Ross, was a naval engineer on submarines, who saw active service in both wars.  She had deep memories, she would share with her children of growing up during the war, and evacuation to the countryside at Bath with her Irish mother Jo, older sister Eileen and younger brother Neville.  She vividly remembered the privations and disruptions of war in Britain.  She said she attended 14 different schools over those years and was old enough to understand and recall her mother’s anguish and worries during that time.  In 1941 her father’s ship, the cruiser HMS Fiji, was sunk by the German Luftwaffe at the Battle of Crete.  For many weeks they had no news of whether he had survived.  In fact, he was rescued from the water and eventually returned to Britain via a long detour and convalescence in South Africa.

After the war, her parents made the decision to emigrate from an impoverished and war-ravaged Britain to Canada.  Val liked life in Canada, and became an inveterate traveller in her youth, backpacking around Europe and North America, where she made friends from many countries with whom she kept in contact over many years.

Val met John, her husband, on a tennis court in 1956, while he was working in Canada after graduation in Engineering in Melbourne.  They married a year or so later in Toronto.  She took citizenship in Canada before sailing back here in 1958 to Melbourne to start their life together.

Melbourne at the end of the 1950s must have seemed about as far away from home as you could get, but they soon became busy raising a young and large family in the eastern suburbs; first in a little brick bungalow in Nunawading with no telephone, then Aquila Street and later Hosken Street in North Balwyn, where I think most of our childhood memories come from.  For years she ferried the family around in the old blue VW Beetle, no seat belts, of course, terrible brakes, the funny little indicator things on the sides that didn’t work.

I think that any feeling of banishment to the penal colonies that Val might have had was greatly eased with the emigration from Canada to Melbourne of her sister Eileen, brother, Nev and her mother and their families.  This meant a new extended family and a bunch of five cousins of similar ages, and this added a great new dimension to the lives of the Peyton family, and Christmases became even busier.  John and Valerie were to finally settle at Harcourt Street, East Hawthorn where they became steadfast OLGC parishioners and have since remained.  Summers were centred on Blairgowrie where John became a keen sailor at the Blairgowrie Yacht Squadron.  Val grew very fond of their great house on a steep block on Nepean Hwy where she loved to settle to read in peace and enjoy the expansive view looking north over the bay.

From the family’s earliest recollections, Val always maintained a quiet and genteel English sensibility in the midst of her children’s self-styled rugged Aussie upbringing.  It was her wish for the girls to attend Sacré Cœur in Malvern while the boys went to Marcellin in Bulleen.  She was an intensely proud mother of her five blonde babies whom she loved to dress as toddlers in her handmade clothes in beautiful fabrics.  She dressed elegantly, and an outing into Collins Street to shop at Georges was her treat.  She was an avid reader, royal follower, and knitter of the most complex Fair Isle jumpers.  She was an excellent cook, and student of nutrition, very health conscious, long before it became mainstream or fashionable, and she was an early advocate of fresh food and healthy cooking which she imparted to her family.  Undoubtedly, the gravitation of her children into the caring professions during our careers was due to Val’s influence.

Val was indeed a global citizen and she wanted her family to experience the life of other countries to expand our horizons.  She hastened to arrange Canadian citizenship for all her children when the possibility became available in the 1970s, and with John enjoyed numerous overseas trips over the years.  The earliest of these trips was to Osaka, Japan, for Expo 70, where she was fascinated by Japanese culture, going on to become an accomplished practitioner of Ikebana.

Val’s son Phillip writes, “on a personal note, my mother from the “old country” on the other side of the oceans, gifted us with a profound and enduring love of history, and an engagement with the wider world not readily acquired at that time from this remote corner of the globe.  She took Australian citizenship, which gave her citizenship of three countries in all.

She was an optimist and quiet enthusiast, but at the same time had an intuitiveness and sensitivity about her.  She had a wry sense of humour and a razor-sharp eye for assessing someone’s character.  Although there were times when life raising a bunch of five teenagers got very hard, Mum would ultimately count her blessings and take comfort in the joys of motherhood, and she continued to bring the same pride and devotion to her 13 grandchildren and growing bunch of great-grandchildren as she got older.  She was insightful, reflective, and kind, always offering support, advice, and reassurance when we looked for it, quietly guiding us to find our own path in life without judgement.  In the end, my memories will be of a warm and loving mother, and for that, Mum, I thank you with all my heart.”

What a lovely tribute to a woman who has raised wonderful children to responsible adulthood. May she rest in peace.